Tripling up on boron bonds

The world's first stable triple-bonded boron compound has been created 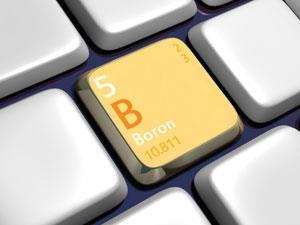 Carbon and nitrogen are well known for their triple bonds, but making stable compounds with a triple bond between two boron atoms hadn’t been achieved despite the computational possibilities. Until now.

Holger Braunschweig of the Institute for Inorganic Chemistry at Julius-Maximilians-Universität in Würzburg, Germany, and colleagues found that reacting a bis(N-heterocyclic carbene) stabilised tetrabromodiborane with either two or four equivalents of sodium naphthalenide, a single electron reducing agent, generates a diborene or diboryne compound, which they isolated and characterised. Their analysis confirms a linear, halogen-free compound with a boron-boron triple bond.1

The formation of triple bonds among the lighter main group elements has always been a problem, with the exception of carbon and nitrogen. When chemists have embedded steric stabilisers in the form of inert groups or simply used heavier elements, the results have been bent molecules.

Aesthetically, boron is an obvious target for efforts to create triple bonded compounds, but chemically it has always been reluctant to play its part, even in attempts to form triple bonds with other elements. A decade ago, chemists succeeded in creating a chilly OCBBCO molecule, which ostensibly contains a B2 unit with a triple bond, but this was possible only at 8K in an argon matrix with a laser to direct proceedings. This is not the most desirable synthetic approach to any molecule, although the success led to much theoretical follow up, which hinted at the possibility of triple bonded boron-boron and other analogous compounds.

The subsequent formation of a diborene compound suggested to Braunschweig and colleagues that if the opportunistic scavenging of hydrogen from the solvent could be avoided then the same reaction for making the diborene might be pushed to create a triple bonded diboryne that is stable at room temperature in the absence of air and water. The team has now succeeded in this quest, exploiting boron-11 nuclear magnetic resonance spectroscopy to show the clear progression from double to triple bond between the pair of boron atoms. Their crystallographic data show a statistically significant contraction of the distance between borons in the double to the triple bonded molecule.

Gregory Robinson of the University of Georgia, US, whose team synthesised the diborene that inspired Braunschweig’s group, describes the work as ‘an outstanding result that will have repercussions throughout the main of chemistry’. He adds: ‘This amazing result shows, once again, the unique capabilities of the determined synthetic chemist. The fact that the boron-boron triple bond has, at long last, been experimentally realised shows that main group chemistry is alive and well.’