Turning carbon dioxide into something useful 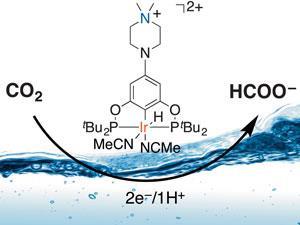 New research shows that a water-soluble catalyst developed by scientists in the US can electrocatalytically transform carbon dioxide into a useful chemical feedstock.

The global demand for fuel is rising, as are carbon dioxide levels in the atmosphere. Recent studies have attempted to address the global carbon imbalance by exploring ways to recycle carbon dioxide into liquid fuels. Formate, the anion of formic acid, is an intermediate of carbon dioxide reduction and can be used as a fuel in formic acid fuel cells. However, the selective production of formate, without using organic solvents, is challenging. Water, being inexpensive and environmentally-friendly, is obviously preferred over organic solvents as a reaction medium. On the other hand, the reduction of carbon dioxide in water is complicated by the reduction of water to hydrogen being a more kinetically favourable process.

Thomas Meyer, Maurice Brookhart and Peng Kang at the University of North Carolina, have designed an iridium pincer catalyst that can selectively reduce carbon dioxide into formate in almost pure water. Formate is made in a 93% yield with no other reduced carbon products formed at the same time. Notably, the catalyst does not catalyse proton reduction to form hydrogen molecules although a small amount of background hydrogen is made at the electrode.

Wenzhen Li, an expert in the electrochemical reduction of carbon dioxide at the Michigan Technological University, US, says that this exciting work reports such a catalyst for the first time. The only problem he sees is that formate and the catalyst are both water-soluble, so an input of energy would be required to separate formate from the solution. ‘It would be even more interesting to develop a [similar] catalyst to further reduce carbon dioxide to carbon monoxide or even hydrocarbons.’

The group is now hunting for more efficient catalysts and ways to immobilise them on electrodes.