The mass of the heavy element lawrencium has been measured directly for the first time by German scientists.1 Lr is the heaviest atom to be weighed so far, and represents an important step towards finding the elusive cluster of unusually stable elements – the island of stability – believed to exist beyond the heavy elements synthesised to date.

This is a progression of earlier work by the same group – led by Michael Block at the GSI Helmholtz Centre for Heavy Ion Research in Darmstadt – that saw the mass of nobelium measured for the first time.2 Prior to this, the masses of the elements above uranium in the periodic table could only be inferred from their decay products. This was not particularly precise. 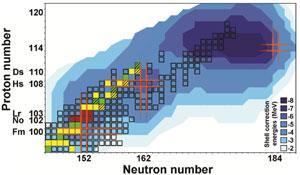 As elements become heavier, their atomic nuclei generally become more unstable, leading to spontaneous radioactive decay, with millisecond half-lives for the heaviest elements. However, it has been predicted that there could be stable superheavy atoms, with half-lives of minutes, days or even years. The stability of these atoms will come from having the ‘right’ number of protons and neutrons, much in the same way that the inertness of noble gases comes from having full shells of electrons. But predicting what the ‘right’ numbers are, and hence the location of this island of stability is proving difficult. Some models predict the atoms will have 114 protons, whereas others suggest 120 or 126.

First the lawrencium atoms needed to be made, using a particle accelerator. To make 256Lr (one of the two La isotopes synthesised), 48Ca particles are accelerated to about 10% of the speed of light and slammed into a 209Bi target. The resulting Lr ions are then slowed down and transported into an ion trap. Here they are drawn around a circular magnetic chamber, and the frequency of the rotations measured, which equates to a very precise measurement of the ion’s mass.

The key issue is the number of times this must be repeated to obtain an accurate measurement: approximately 50. The nobelium isotopes weighed in 2010 were produced at a rate of around one every second. However, in the case of 256Lr, only about one atom every minute was made. Owing to the efficiency of the method, the rate of trapping was only one atom every two hours, meaning the conditions in the ion trap needed to be held steady for around four days to allow enough measurements to be taken. Achieving this took two years of instrument tweaking.

As he continues his search for the island of stability, Block will now try to accurately weigh heavier atoms still. The problem being, as described above, that the production rate goes down steeply as you move through the periodic table. ‘For element 114 it will take 3-4 days to produce one atom,’ says Block. A change of tactics is therefore required: ‘A key improvement for us is to implement a new detection where we can get enough information from one atom [rather than needing 50 atoms].’

This is wonderful work,’ exclaims Rolf-Dietmar Herzberg, who researches superheavy nuclei at the University of Liverpool, UK. This is ‘absolutely crucial input’ to the models describing elements in this area, he explains. Using these anchor points to improve current models gives researchers the confidence to extrapolate modelled data up to the super heavy elements – allowing more accurate predictions of where the elusive island of stability might be found.