Two catalysts better than one

US researchers have cracked a long standing problem in chemical synthesis - the catalytic alpha-alkylation of aldehydes - by combining two catalysts in one pot. The reaction is the first to combine a transition metal catalyst with an organocatalyst, and offers a simple route to compounds that have previously been out of reach, the researchers say.

The reaction relies on the interplay between both catalysts to generate two reactive compounds - an activated aldehyde and alkyl radical - that combine to form the product. Coupling aldehydes to a range of reaction partners, while controlling the product stereochemistry to give a single enantiomer, is a long standing aim of synthetic chemists - but had proven elusive, says David MacMillan, who led the research at Princeton. The new reaction gives good conversion rates, but most importantly, gives complete stereochemical control of product.

The organocatalyst had been used previously by the Princeton group to activate aldehydes. But, despite activation, the aldehyde would only react with a narrow range of highly reactive partners. Adding the inorganic catalyst - a photoactive ruthenium complex - solved this problem, generating a highly reactive alkyl radical in situ that readily attacked the activated aldehyde. 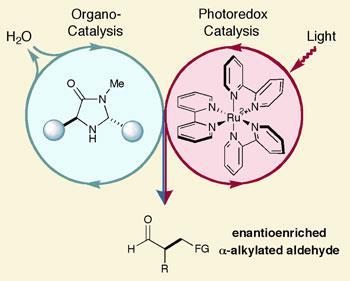 The photoactive inorganic ruthenium catalyst that the researchers chose is commonly used to mimic the processes of photosynthesis and operates through a single electron transfer process. However, whereas the light-activated catalysts typically used in synthesis require a powerful UV lamp, a standard light bulb was enough to activate the ruthenium catalyst, which could both pull apart the carbon-halogen bond to form the radical species and reduce the reaction intermediate to generate the desired product.

’To my knowledge, no-one has taken photoredox catalysis and applied it to organic syntheses’ says MacMillan. ’What is amazing is that the light from a standard fume hood is enough to get the reaction to go.’

’Photochemistry usually requires specialist equipment, including a high energy radiation source.’ says Matthew Gaunt of the University of Cambridge, UK. ’This system, requiring only the energy from a standard light bulb, makes the process instantly accessible to any synthetic chemist.’

The general chemistry represented could be applied to other organic transformations, say the researchers. Equally, with it requiring such a low energy light source, it has the potential to be scaled-up far beyond the two gram scale that has so far been achieved.

’This is a transformation I consider a "dream reaction",’ says Benjamin List, a leader in the field of organocatalysis at the Max Planck Institute in Germany. ’This is clearly a reaction of great promise for natural product synthesis and the production of pharmaceuticals.’