Magnetic microspheres' self-organisation into tubules could be harnessed for microfluidics 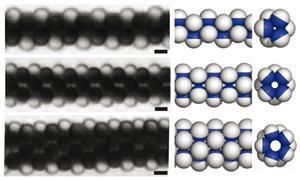 US scientists have synchronised the motion of colloidal magnetic spheres with a rotating magnetic field and found that the particles self-organise into micrometre-sized tubes. The work offers a new approach for designing self-assembling structures that could potentially be useful for microscale devices involved in fluid flow control or selective cargo uptake and transport.

While structures such as tubes have been generated from colloids by self-assembling processes before, these have typically been focused on equilibrium, as opposed to dynamic, systems. Synchronisation has largely remained within the domain of mathematics and no one has previously linked the concept to self-assembling materials as a way to create new dynamic spatial structures.

Now, Jing Yan and colleagues at the University of Illinois at Urbana-Champaign and Northwestern University in Evanston, Illinois, have created microtube structures – similar to microtubule structures found in cells – by synchronising the oscillations of nickel-coated silica particles suspended in liquid.

'As the authors note, this kind of self-assembly is quite different from what we chemists refer to as self-assembly,' says Jonathan Nitschke who investigates self-assembling systems at the University of Cambridge, UK. 'These tubular assemblies appear not to be stable when the system is at rest, but rather, only when a twisting magnetic field is applied, causing the spheres to precess. The assembly of the tubules is thus properly dynamic, requiring energy input and motion to persist.'

The team first created Janus spheres – named after the Roman god who had two faces on each side of his head – by depositing magnetically sensitive thin nickel films onto one side of spherical silica particles. This gave the particles a magnetic and a non-magnetic side. The particles were then suspended in deionised water and a precessing magnetic field was applied. This forced the particles to spin on their axis in a movement similar to a gyroscope.

They observed that when the particles are close enough to each other they are affected by each other’s' magnetic field causing them to synchronise their oscillatory phase and frequency and self-organise into stable tubular structures. By slightly varying the parameters of their system the team could selectively form several different possible tubular structures. As soon as synchrony is lost, the structures fall apart.

'Dynamic self-assembled structures that actively dissipate energy in order to maintain their structure are found throughout living matter – microtubules in cells are an example – but they are very hard to generate synthetically,' says Nitschke. 'This work is a novel and clever example of such a system.'