Researchers have used mass spectrometry to determine the stereochemistry of a prototypical chiral molecule, CHBrClF. With further developments in instrumentation and data processing, the technique might be used with larger molecules, particularly those that cannot be analysed by x-ray crystallography, the researchers say.

Chiral molecules are often compared to our hands: mirror images that do not match up when placed on top of each other. Though pairs of chiral molecules only differ in the structural arrangement of atoms at particular positions, they can have vastly different effects in the body when taken as medicine, for example. That means chemists building pharmaceuticals need to know which ‘hand’ of the molecule they’ve synthesised. 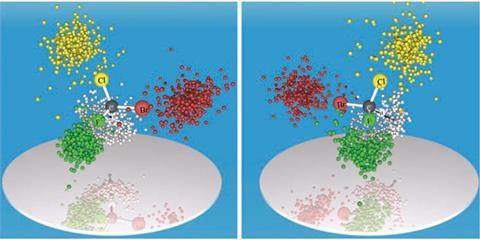 However, x-ray crystallography, the standard method of directly determining the position of atoms in space, is not always possible for pharmaceuticals because it requires pure crystalline samples containing heavy atoms like metals or bromine.

Robert Berger, at the Technical University of Darmstadt, Germany, Markus Schöffler, at the Johann Wolfgang Goethe University, and their team turned to a mass spectrometric technique called Coulomb explosion imaging to determine the structure of a chiral molecule in the gas phase.

The researchers shot a laser into a stream containing both isomers of CHBrClF, stripping electrons from each molecule. Ionised molecules explode into fragments that travel through an electric field and smash into a detector. Knowing a fragment’s mass and position as it hits the detector, the researchers can calculate its momentum, and thus determine its original position around the central carbon atom. This technique has the advantage that molecules that will not easily crystallise can likely be vaporised, Berger says.

To get straightforward structural information, the researchers only recorded fragmentations that destroyed every bond to the carbon atom. This five-fold fragmentation is rare compared with simpler separations, so the researchers needed to use a long measurement time and millilitres of sample – a large amount by mass spectrometry standards, Berger says.

Nevertheless, tracking the location of five atoms pushes the limits of this established type of single molecule spectroscopy, as others have previously worked with only di- or tri-atomic molecules, says physicist Benjamin Erk, at the German Electron Synchrotron.

Determining stereochemistry of even larger molecules is still challenging because the increased number of signals makes it harder to trace them back to their locations. But given improvements in technology and algorithms, Peter Schreiner, at Justus Liebig University in Germany, thinks ‘it’s only a matter of time before it can be done’. Compared with other ways of determining stereochemistry, this approach is advantageous because it works using a racemic mixture containing both forms of a chiral molecule, he adds.