Van Gogh’s Sunflowers may be wilting in the sun

‘I am working at it every morning from sunrise on, for the flowers fade so quickly,’ lamented Vincent van Gogh as the sunflowers he was painting wilted. But his famed series of Sunflowers paintings may themselves be fading as an international group of scientists has found evidence that a yellow pigment Van Gogh used is changing chemically under sunlight.1 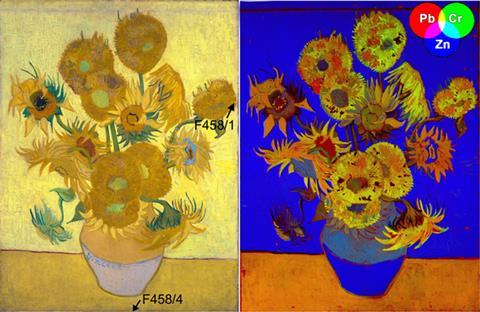 Painted in the autumn of 1888 in France, the Dutch artist’s rendition of a vase filled with sunflowers is arguably one of his most famous works. Van Gogh was adept at mixing  lead-based pigments, such as lead chromate, also known as chrome yellow, to produce the rich colours we see today, such as the bright aurora of each petal in Sunflowers. But conservators and art historians have been debating whether that was ever his intention, as inadvertent changes in the colours appear to have occurred over the past hundred years.

‘It’s a very iconic painting and it’s the one which is, for the painting curators, also quite a hard one to figure out,’ says Koen Janssens from the University of Antwerp, Belgium. ‘To try to understand how it looked originally, whether it looked like as it looks now or not.’

Janssens and his colleagues, based at the centre for scientific methodologies applied to archaeology and art (SMAArt) in Italy, began to tackle this issue back in 2011 by manufacturing artificial samples of lead chromate pigment and exposing them to light.2 Using x-ray absorption near edge structure spectroscopy, the team found that sulfate-rich lead chromate darkened over time, with any chromium present being reduced from chromium(IV) to chromium(III).

After being given access to one of Van Gogh’s original Sunflowers paintings at the Van Gogh museum in the Netherlands earlier this year, the SMAArt sleuths have now revealed this process is indeed occurring within the petals of this prized work.

‘In the light-sensitive version of lead chromate you do not have a 1:1 ratio of chromium to lead … but [it’s] somewhere between 1:2 and 2:3,’ comments Janssens. ‘We used micro x-ray fluorescence to try and see where this ratio appeared and it turned out that that was quite substantial – in quite a lot of locations on the sunflowers this was the case.’ Using this portable tool, Janssens and his colleagues were able to produce a complete compound map, finding sulfate-rich lead chromate within the petals and the table at the bottom of the piece.

But this piece of information alone does not confirm that a painting has aged and the team also had to prove that degraded chromium species were also present. Two microsamples were taken from the areas thought to have degraded and x-ray absorption spectroscopy revealed that there was a significant amount of chromium(III) present, suggesting the petals are in fact darkening over time.

Such a finding may encourage curators to reassess their preservation strategies for these delicate artworks, but this research will provide a vital resource for them, according to Letizia Monico from SMAArt. ‘The availability of a “high risk map”, showing the regions that are composed of the light-sensitive type of the chrome yellow pigment, is very important,’ Monico tells Chemistry World.

Francesca Casadio, co-director of the center for scientific studies in the arts at Northwestern University, US, agrees that this will aid conservators in their efforts to prevent these works being irreparably damaged. ‘It really shows a gigantic leap forward in just the diagnosis of an issue with colour change to being able to have tools that can inform preventative conservation.’