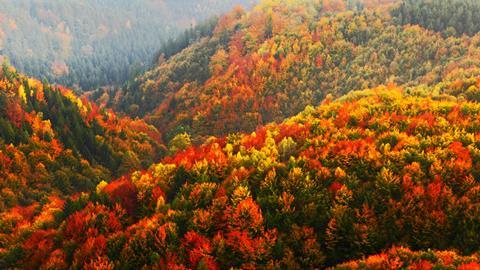 Explainer: The chemistry of autumn

Pigments, hormones and enzymes – find out the secret chemistry behind the wonders of autumn

Nothing says autumn like comforting, warm, orange and red tones: sweet potatoes, carved pumpkins, fallen leaves, a night by the fireplace. But what is the chemistry behind autumn’s colours? Why do some plants lose their leaves? What role do enzymes play in all these processes?

The colour of leaves comes from molecules called pigments. A pigment is a chemical that absorbs some wavelengths of light but reflects others. Our eyes see the colours corresponding to the reflected wavelengths. During spring and summer, the most abundant pigment in plant leaves is chlorophyll. This lollipop shaped molecule is very similar to the haem group that carries oxygen in the blood, but instead of having iron at its centre it has magnesium. The combination of magnesium with the chlorophyll molecule means that it reflects green light. Chlorophyll absorbs the rest of the visible spectrum and is capable – with an array of biomolecular machinery – of transforming this energy into carbohydrates in a process known as photosynthesis.

Why do leaves turn yellow or red in autumn?

As it gets colder and darker as autumn arrives, having leaves packed with chlorophyll costs plants a lot of energy for little return. This is because chemical reactions proceed more slowly when it’s cold and the shorter days and more diffuse light mean little energy is harvested. As a result many plants stop producing the pigment altogether. As plants breakdown all their chlorophyll as winter approaches, their leaves gradually turn yellow thanks to a family of molecules called xanthophylls that are found in leaves all year round. Xanthophylls are molecules with a lot of conjugated carbon–carbon double bonds that reflect yellow light and are also responsible for the colour of egg yolks and sunflowers.

While we may think yellow leaves are pretty, they’re a problem for the plant. This is because yellow foliage attracts aphids and other parasites that can damage it. As a result, plants developed a chemical defence mechanism to hide these yellow leaves: carotenoids and anthocyanins. These molecules have characteristic and intense orange and red colours that are responsible for the colour of carrots, pumpkins and maple leaves. While carotenoids are present in leaves all year round, anthocyanins are specially synthesised by the plant in autumn and injected into the leaves to not only camouflage plants from bugs, but also protect them from sunlight that, once the chlorophyll has gone, may seriously damage leaves.

Why do some trees lose their leaves?

In contrast to deciduous plants, some trees keep their leaves all year long. The Latin names for these trees usually include the word ‘sempervivens’ meaning ‘always alive’. Most evergreen trees evolved in tropical climates, where cold seasons are shorter, or even non-existent. While evergreen trees do lose their leaves, they always replace them immediately.

Most trees in cold climates are deciduous because the energy cost of keeping leaves alive is far too high. Also, large leaves act like sails on those wintery windy days, putting the tree in danger of being blown over. Even so, some evergreens like conifers can survive the cold, but they are an exception rather than the norm.

How do trees ‘decide’ to ditch their leaves?

The answer to this question is hormones. When you hear the word hormones, you might think of sullen teenagers, the menopause or sexual attraction. But hormones are simply molecules that transport chemical messages in both animals and plants. 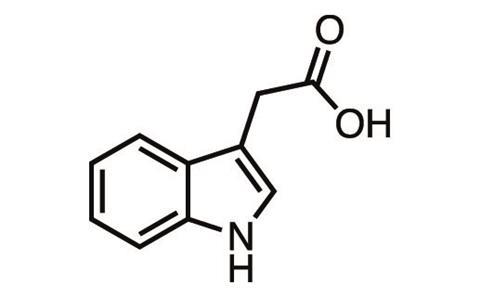 The general structure of auxins, a group of plant hormones that play a big part in trees’ autumnal extravaganza

When autumn arrives, chlorophyll levels drop, a signal that triggers the release of a series of hormones. For years, scientists believed that the main molecule that resulted in trees losing their leaves – or, as they call it, abscission – was abscisic acid. Despite its name, it turns out this substance is not that important in abscission. Two different plant hormones, ethylene and auxins, play a much more important role.

Ethylene, the simplest alkene, is a gas that accelerates fruit maturation, but decreases leaf growth and promotes abscission. Ethylene is produced from the amino acid methionine via a long chain of biochemical reactions. As darkness stimulates the biosynthesis of this gas, plants increase their ethylene production in autumn and winter, causing their leaves to drop.

Auxins are a family of indole derivatives that regulate cell growth. A healthy, green leaf produces plenty of auxins and so keeps growing. It also delivers auxins to the rest of the plant through its petiole – the stalk that connects the leaf to the tree. However, when autumn comes and chlorophyll levels decline, so do auxins. The tree no longer receives chemical signals from the leaves that they’re green and healthy, and so abscission begins.

How do trees cut their leaves loose?

When both ethylene and auxins trigger abscission the leaves begin to ‘self-destruct’. The tree stops sending nutrients to the leaves and degradation of the bottom of the petiole, known as the abscission zone, starts. Most cells already know how to disassemble themselves but degrading cellulose, the main component of plants’ cell walls, is a bit trickier.

Cellulose is the world’s most abundant polymer. It’s made out of thousands of units of glucose linked by glycosidic bonds. You can degrade cellulose in the lab, but this requires extremely acidic conditions. Plants, on the other hand, take advantage of enzymes, nature’s catalysts. They use a family of enzymes called glycosidases that specialise in breaking down glycosidic bonds. Glycosidases that specialise in degrading cellulose are known as cellulases.

These enzymes are very rare in nature, and yet most plants have them. Humans, on the other hand, cannot make cellulases, so we cannot digest this polysaccharide. This is why dietary fibre (mostly cellulose) may satisfy your appetite but won’t make you pile on the pounds. Even herbivores that live off a diet rich in cellulose, such as grass, cannot digest it as they don’t produce cellulases. They depend on symbiotic bacteria living in their digestive systems that can slowly break down the polymer into glucose units. This is why ruminants spend so much time digesting lunch.