Virulence from the deep sea

Life surrounding hydrothermal vents and hot springs in the deep sea relies on chemosynthetic bacteria, which often live in symbiosis with the resident animals such as clams and tube worms. Now, genome sequences of two of these symbionts have revealed surprising similarities with common bacterial pathogens of humans, including Helicobacter, which causes stomach ulcers, and Campylobacter, which causes food poisoning.1

Until very recently, these deep sea endosymbiotic bacteria resisted all attempts to be cultured in the lab, which is what microbiologists normally have to do before they can characterize and name a new species. Researchers had to resort to studying crude samples, such as those taken directly from tube worms.2 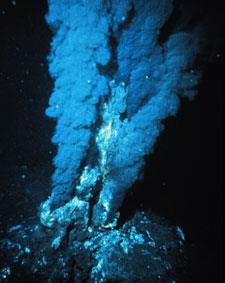 Satoshi Nakagawa at the Extremobiosphere Research Center at Yokosuka, Japan, recently managed to obtain pure cultures of several strains of bacteria living around hydrothermal vents, which they strongly believe to be symbionts (although their remote-control sampling technique doesn’t allow them to pin down exactly where the bacteria live). Now the same group has completed the genome sequences of two such strains, belonging to the genera Sulfurovum and Nitratiruptor.

The genome sequences, compared with the substantial body of sequences both from close and not-so-close relatives, revealed many details of the adaptations that allow these bacteria to thrive in extreme physical conditions and in the absence of photosynthesis. Like the bacteria from tube worms, these two species have the complete assortment of genes necessary to run the Krebs cycle backwards. The Krebs cycle is a key set of reactions in nearly all aerobic cells, which the extremophile bacteria reverse in order to create organic molecules, rather than to digest them. More surprisingly, the researchers obtained valuable insights into the adaptation of bacteria in a very different extreme environment: the human stomach. Nakagawa’s team found several genes believed to be crucial virulence factors for the human pathogens Helicobacter and Campylobacter, which can survive in the highly acidic environment of our stomachs. The researchers concluded that ’the deep sea vent chemoautotrophy has provided the core of virulence for important human and animal pathogens.’

Thomas Schweder from the University of Greifswald, Germany, whose earlier work on tube worm symbionts is mentioned above, agreed. Nakagawa’s work ’sheds new light on the evolution of human pathogens,’ he told Chemistry World.