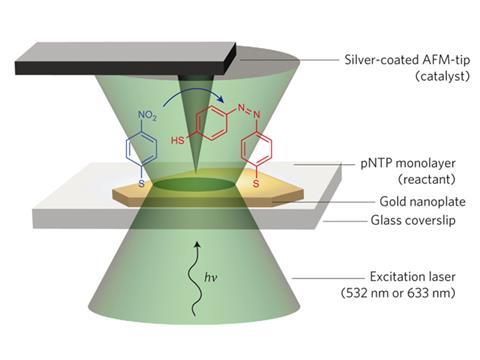 By shining laser light on the modified tip of an atomic force microscope (AFM), researchers in Germany and the Netherlands have been able to watch a catalytic reaction in real time, zoomed right in to the nanoscale. The technique combines AFM with Raman spectroscopy, using the silver-coated AFM tip to boost the reaction’s Raman signal while also acting as the catalyst. Using this hybrid approach, the researchers could follow the catalytic conversion of reactants into products with a spatial resolution of just a few nanometres.

The technique is an adaption of a process called tip-enhanced Raman spectroscopy (TERS), and has been developed by Volker Deckert at the Institute of Photonic Research in Jena, Germany, Bert Weckhuysen at Utrecht University in the Netherlands and their colleagues.

Conventional Raman spectroscopy is a light-based technique that can detect different organic functional groups in a sample, thanks to the characteristic way that they absorb and then re-emit laser light. TERS uses a modified AFM tip covered in nanoscale silver nodules to dramatically enhance this effect, as electrons in these tiny silver spheres oscillate in harmony with the laser light to boost the Raman signal. Crucially, the effect is very highly localised, only enhancing the Raman signal from molecules within a few nanometres of the tip.

Deckert and Weckhuysen have now shown that, at the same time as amplifying the local Raman signal, the silver nanospheres on the AFM tip can also function as a catalyst, giving a close-up view as reactants are turned into products on catalyst’s surface. To demonstrate the technique, the team investigated the photocatalytic reduction of p-nitrothiophenol, a reaction that generates a new nitrogen-nitrogen double bond that is clearly visible using Raman spectroscopy.

Having proven the technique in principle, the researchers can begin to use it to answer questions about how catalysis works at the nanoscale. ‘For us, the main interest is in the site specificity of catalytic reactions,’ says Deckert. ‘We can now investigate the sites and the reaction itself with molecular specificity and nanometre resolution.’

Peng Chen, who researches single molecule spectroscopy at Cornell University, US, is impressed by the work. ‘It is a beautiful study in pushing techniques for catalysis investigations,’ he says. ‘The researchers have shown that this approach can monitor catalytic reactions on a surface in situ and in real time. The next frontier along the line would be to demonstrate the spatial resolving power by scanning the tip, pushing the sensitivity, improve time resolution.’

‘Certainly there is plenty of room for optimisation,’ Deckert agrees. The potential applications of the technique extend far beyond catalysis, he adds. ‘We are focusing on the ultimate spatial resolution to investigate for instance the direct sequencing of DNA.’