Watching the dance of electrons in reactions

The movement of electrons within and between molecules is the very essence of a chemical reaction. And now, using ultrafast laser pulses, an international team has for the first time directly observed how electrons move and rearrange as molecules pass through a ’conical intersection’ - an important feature of many reaction pathways. The findings could have important implications for our understanding of how biological molecules perform their tasks in processes such as photosynthesis.

Hans W?rner, from the Swiss Federal Institute of Technology in Zurich, and colleagues studied the photodissociation of NO2 into NO and oxygen atoms. One reason for picking this reaction, W?rner says, is that NO2 is a small molecule, so the theoretical predictions of its behaviour are relatively simple. But the complication is that the reaction mechanism involves a conical intersection.

A conical intersection is a point where two potential energy surfaces touch. Potential energy surfaces are described by calculating the potential energy of every possible orientation and configuration of the reacting molecules. They look like landscapes with peaks and valleys representing high and low energy arrangements. Changes in the way the molecule is stretching or vibrating corresponds to movements to different points on the surface. For photochemical reactions, and others that involve molecules in excited electronic states, there are essentially two of these landscapes on top of each other, one for the excited state and one for the ground state. At any point, the distance between them represents the energy required to excite the molecule, or which would be emitted if it decayed back to the ground state. 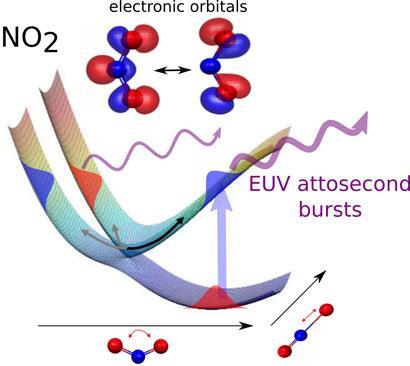 The simplest kind of conical intersection is where a peak on the lower surface meets a well in the upper one, like two cones joined at their points. This means that excited molecules can transfer to the ground state without emitting any energy, so electronic energy is directly converted into vibrational energy of the nuclei, which leads to bonds breaking and forming. It also makes theoretical calculations of what’s going on devilishly difficult and spectroscopic observation by previous methods almost impossible.

’Understanding how optical energy is converted into useful work is key to understanding the photochemistry of a lot of biological molecules,’ says Ben Whitaker, an expert in molecular reaction dynamics from the University of Leeds, UK. Many processes like vision, photosynthesis and the ability of DNA to withstand UV radiation involve conical intersections funnelling energy into desirable transformations rather than being wasted as heat. Being able to directly observe the electronic motion of molecules around these intersections should provide significant insight into those processes, Whitaker adds.

’The advantage of high harmonic spectroscopy is that it’s very sensitive to electronic structure,’ W?rner says. ’We place the molecules in a strong laser field, so strong that it can remove an electron from the molecule.’ The electron is accelerated and then driven back to recombine with the original molecule when the electric field associated with the laser pulse reverses. This causes it to emit an attosecond pulse of extreme ultraviolet radiation. ’This is a very short flash of light that contains a snapshot of the electronic structure of the molecule.’

By piecing together these snapshots, the team were able to see what the electrons in the molecules were doing just as they pass through the conical intersection. ’We see the electronic character of the molecules oscillate between the two states with different electronic symmetry,’ says W?rner. ’The symmetry change is predicted in calculations, but we have done the first experiment that allows us to visualise it.’

But Whitaker also notes the possibility of an even more significant application of the technique. ’We’ve always treated electronic structure, as a first approximation, in terms of one-electron molecular orbitals. The complexity of computational chemistry comes from sorting out what to do after that approximation,’ he points out. ’It’s the electron-electron correlations that really make theoretical chemistry so hard, and here is an experiment that is giving us a hint of how to probe those electron-electron correlations directly.’