Aluminium clusters’ ability to split water molecules and release hydrogen is dictated by the geometric arrangement of active sites on their surface, US scientists have discovered. Many aluminium clusters will absorb water onto their surfaces, but only a few take the reaction a step further, breaking up the water molecules to produce hydrogen. Understanding this relationship might lead to design of new selective catalysts for hydrogen production, or other related applications.

Welford Castleman Jr. and his group from Penn State University make their clusters by vaporising aluminium with a laser. This aluminium plasma is than expanded into a chamber containing a lower pressure gas, which forces it to cool and form the clusters. When the team exposed these clusters to water, they noticed that some of them appeared to release molecular hydrogen.

The interesting factor in these reactions is the selectivity, as Castleman explains: ’When you take sodium and throw it into water, it looks like pretty much every atom is involved in some reaction that will produce hydrogen. In our case only certain aluminium clusters react and others don’t, so what we were doing was to try and sort out these unexpected reaction mechanisms.’ 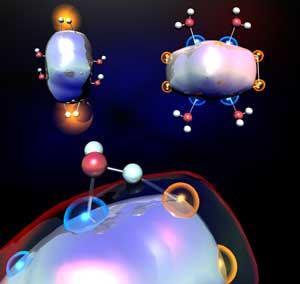 The team discovered that only clusters of certain sizes and geometries can perform the hydrogen-forming reaction. Previously the reactivity of these clusters was thought to depend solely on the number of electrons in the cluster, but Castleman proposes that it is actually the geometric distribution of electron density on the cluster surface that dictates whether any reaction will occur. The surface of the cluster must have one aluminium atom which can act as a Lewis base in close proximity to a second site acting as a Lewis acid. The Lewis acidic site binds the oxygen atom of a water molecule, allowing abstraction of one of the hydrogen atoms by the adjacent Lewis basic site.

If a second water molecule reacts at another pair of aluminium sites somewhere close by on the cluster surface, then the two bound hydrogen atoms can be released as molecular hydrogen. While several of the clusters studied would adsorb and react with water molecules, only clusters of 16, 17 or 18 aluminium atoms had the appropriate arrangement of active sites to allow the release of hydrogen molecules.

’We are talking about production of hydrogen on a very small scale,’ Castleman stresses. ’What we are doing is laying out some fundamental mechanisms by which hydrogen can be generated, perhaps giving people some idea of how they might more effectively make hydrogen in bulk quantities.’

Charles Mims, from the University of Toronto, Canada, agrees that the work is interesting. ’[Castleman has shown] clear variation of the reactivity of water with aluminium clusters as a function of the cluster size, and provided insight into which sites on the clusters provide facile activation of water.’ However, he is more sceptical about the possible applications of the technology: ’This system should not be viewed as providing a lead for hydrogen generation for hydrogen energy systems, since the aluminium cluster is oxidized in the process. It must be regenerated (at an energy cost higher than that available in the product hydrogen) if it is to produce more than a few hydrogen molecules per cluster.’

Castleman agrees that it will be a challenge to sustain the hydrogen formation, since they will need to work out an effective way of regenerating the clusters by removing the hydroxide groups that end up stuck to the surface after the release of hydrogen. He explains that his group are working on the problem, and that while the technology may not be suitable for bulk production of hydrogen, it could be used to provide controlled local generation of hydrogen on demand at low levels.