Even 10 years after bottling, wine still holds a chemical imprint of the forest from which the wooden barrel it was aged in came

European researchers have discovered that even 10 years after bottling, wine still holds the chemical signature of the forest from which the barrel used to age it was made. The approach could be used to detect wine fraud in the future, say the team.

The chemical composition of wine depends on a complex mixture of factors including how and where the grapes are grown, how the wine is made and the aging process used. The volatile and polyphenolic compounds involved in the taste, smell and therapeutic effects of wine have been well studied - but have generally only been considered one chemical at a time.

Due to wine’s complexity, an approach that looks at many compounds at once could provide new insights into its chemical composition. A European team, led by R?gis Gougeon, University of Bourgogne, Dijon, France, and Philippe Schmitt-Kopplin, Helmholtz centre in Munich, Germany, are the first to take such a holistic approach, studying wine metabolomics.

’By using the most recent advances in ultra high resolution mass spectrometry, we have shown that it is now possible to provide an instantaneous picture of how diverse the chemical composition of a wine can be,’ Gougeon and Schmitt-Kopplin told Chemistry World.

The researchers used a high-field ion cyclotron resonance-Fourier transform mass spectrometer to collect their data, one of only 10 of its size worldwide. The machine generates a phenomenally large amount of data for each type of wine analysed; for example, the 1995 Vosne Roman?e - a red burgundy - generated 17 400 peaks in the resulting spectrum. After statistical processing the team were able to attribute these peaks to 1180 unique elemental CHONS compositions. 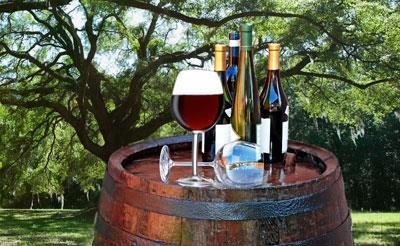 To demonstrate the potential of the approach, the team concentrated their research on wine known to have been aged in oak barrels from nine different forests across France. They showed that they could match the chemical fingerprints of the oak with the chemical composition of the wine, and therefore identify in which of the nine forests the oak for the barrels used to age the wine was grown.

The metabolomic approach was crucial to making this link, say the team. The chemical composition of individual trees in a single forest varies considerably, and only some of the trees’ chemical signature is actually transferred to the wine. Add to this the fact that some of the compounds will undergo chemical reactions while the wine is in the bottle, and the result is a hugely complex chemical combination. ’At that point, only holistic and ultra high resolution approaches can possibly relate the instantaneous chemical signature to original information,’ explain Gougeon and Schmitt-Kopplin. No other approach - analytical or sensory - has been able to significantly discriminate wines according to the species or the origin of the oak used for the barrels before, they say.

The scientists showed that the approach works on initial grape extracts right through to wines that had been aged in the bottle for 10 years, in red and white wine, and in champagne.

’The holistic approach allows us to consider it as a complex biological system in constant evolution, and to pick at a particular moment how each instrument of the orchestra contributes to the concert,’ say Gougeon and Schmitt-Kopplin.

The price of the mass spectrometer means that the use of the technique is currently limited to fundamental research, but if the concept could be transferred to lower resolution - and therefore cheaper - machines in the future, it could become a tool for detecting wine fraud, say Gougeon and Schmitt-Kopplin.

Susan Ebeler from the University of California Davis, US, an expert in using analytical techniques to study the chemistry of wine, describes this work as ’an exciting use of some very nice technology’.

’It could be used eventually in the authentication of wine; by region, variety and processing,’ she adds.