Dame Kathleen Lonsdale, born 100 years ago this year, played a fundamental role in establishing the science of crystallography. 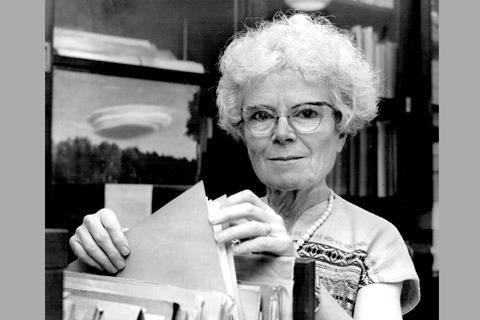 Kathleen Lonsdale (née Yardley) was born on 28 January 1903 in Newbridge, County Kildare, Ireland. Although she is not particularly well-known outside her own subject, she played a fundamental role in establishing the science of crystallography and in her scientific career scored several important firsts. Her friend and contemporary, the 1964 chemistry Nobel laureate Dorothy Hodgkin, said of her: ‘There is a sense in which she appeared to own the whole of crystallography in her time’.

Kathleen was the youngest of 10 children, born to Harry and Jessie Yardley. Her father was postmaster at Newbridge Post Office, following a career in the army. He married Jessie Cameron, a Scot, in 1889. Harry read widely and Kathleen later said ‘I think it was from him that I inherited my passion for facts’. Unfortunately there were problems and in 1908 Jessie left him and took the children to Seven Kings in Essex. Harry Yardley died when Kathleen was 20. Her mother was a Christian of the strict Baptist persuasion and Kathleen’s earliest memories are of attending Church of Ireland services and the Methodist Sunday School in Newbridge, and learning to count with yellow balls in the local school.

From 1908 to 1914 Kathleen attended Downshall Elementary School i in Seven Kings and then won a scholarship to Ilford County High School for Girls. She was a good student, especially in mathematics and science. However, she had to attend classes in physics, chemistry and mathematics at the boys’ high school because the girls’ school didn’t offer these subjects. Her older siblings couldn’t stay on at school but had to go out to work to help support the family. Her brother Fred was an early wireless operator and received the last signals from the Titanic in 1912.

Kathleen did well in her exams and won a county major scholarship, with distinctions in six subjects. She was allowed to enter Bedford College for Women, part of the University of London, at 16. She first read mathematics but at the end of her first year switched to physics, against the advice of her old headmistress, who said she would never distinguish herself in physics. Kathleen came top in the University of London BSc examination in 1922, with the highest marks for 10 years. She was invited by W. H. Bragg, one of her examiners and a pioneer of X-ray diffraction, to join his research school at University College, London (UCL). Bragg was an inspiring supervisor and Kathleen wrote of him: ‘He inspired me with his own love of pure science and with his enthusiastic spirit of enquiry and at the same time left me entirely free to follow my own line of research’. On Bragg’s advice she worked on the structure of simple organic crystals, and collaborated with W. T. Astbury on the theory of X-ray diffraction. In 1923 W. H. Bragg moved to the Royal Institution (RI) in London and Kathleen went with him. Bragg set up team of young researchers, including John Desmond Bernal.

It was at UCL that Kathleen met Thomas Lonsdale, an engineering student at University College. They were married in 1927 and moved to Leeds the same year when Thomas got a job at the Silk Research Association. Thomas encouraged her to continue her scientific work and she worked on X-ray diffraction in the University of Leeds’ department of physics. Whilst there, C. K. Ingold in the chemistry department gave her some crystals of hexamethylbenzene to study. Her results showed conclusively that the benzene ring was flat, something that chemists had been arguing about for 60 years. This was an important milestone in organic chemistry. Lonsdale also applied Fourier methods for the first time to analyse X-ray patterns in solving the structure of hexachlorobenzene.

In the evenings Thomas did experiments in the kitchen for his PhD, while Kathleen did her calculations by hand. In 1929 their first child Jane was born and soon after they returned to London, where two more children, Nancy (1931) and Stephen (1934), arrived. The move and the children disrupted her experimental work again and Lonsdale stayed at home doing calculations of structure factors. In 1931 Sir William Bragg wrote to her: ‘A piece of good news! Sir Robert Mond is giving me £200 with which you are to get assistance at home to enable you to come and work here. Can you come and see me soon?’. This allowed her to move back into research at the RI with Bragg, where she stayed for 15 years and for a time she occupied Michael Faraday’s old room.

During her time at the RI Lonsdale worked in many areas related to X-ray crystallography - both theoretical and experimental. She was awarded a DSc by University College in 1936 and in 1945 she and Marjory Stephenson became the first women Fellows of the Royal Society.

After World War II Lonsdale was encouraged to move into academe and in 1946 she became reader in crystallography at UCL. In 1949 she became professor of chemistry and head of the department of crystallography. Only then, at the age of 43, did she start to build up her own research school and get involved in teaching.

Although crystallography goes back to the work of René Just Haüy (1743-1822), it didn’t really take off until 1912 when Max von Laue showed that the newly discovered X-rays (1895) could be used to look inside crystals. William and Lawrence Bragg, father and son, then used X-rays to solve simple inorganic structures and developed Bragg’s Law to explain X-ray scattering crystals. World War I disrupted research, but after the war, the Braggs divided the crystal world between them. The father, at UCL, chose the organic structures and quartz, and his son, at the University of Manchester, took the rest of the inorganic substances.

Peter Childs is lecturer in inorganic chemistry at the department of chemical and environmental sciences, University of Limerick, Limerick, Ireland.

Lonsdale was brought up a strict Baptist, but as an adult she found their beliefs restrictive. She and her husband joined the Quakers, whose strongly pacifist yet activist position appealed to Kathleen. At the beginning of World War II everyone was expected to register for war service, but she ignored the requests and was summonsed and fined £2. When she refused to pay the fine she was sent to Holloway Prison for one month. Although Lonsdale had to clean floors and do other jobs, she was allowed books and papers and managed to get seven hours scientific work done each day. This prison term marked the start of a life-long interest in prison reform and Lonsdale became a prison visitor for several women’s prisons after the war.

She visited many countries after World War II including Russia and China, but she had trouble getting a visa to visit the US. One embassy official told her: ‘You’ve been to the three most difficult places: Russia, China and gaol’.

Lonsdale was also involved in movements to promote peace, including the Pugwash Movement, and was vice-president of the Atomic Scientist’s Association and president of the Women’s International League for Peace and Freedom. She was often invited to speak on non-scientific topics at home and abroad, including science and religion, and the role of women in science. She advocated greater participation of women in science, and knew first-hand the difficulties of combining marriage and a family with a professional career. She wrote: ‘Sir Lawrence Bragg once described the life of a university professor as similar to that of a queen bee, nurtured, tended and cared for because she has only one function in life. Nothing could be farther from he life of the average professional woman’.

She had very strong views on the need to encourage and support women who wanted to have a family and use their scientific talents, saying in 1970: ‘Any country that wants to make full use of all its potential scientists and technologists could do so, but it must not expect to get the women quite so simply as it gets the men. ...Is it Utopian, then, to suggest that any country that really wants married women to return to a scientific career, when her children no longer need her physical presence, should make special arrangements to encourage her to do so?’.

Lonsdale was also very keen on encouraging science education and helped start the Young Scientist’s section of the British Association for the Advancement of Science (BAAS). She made a note to herself: ‘Never refuse an opportunity to speak in schools’.

Lonsdale worked in the area of X-ray crystallography from 1922, when she started as a young research student, to her death in 1971. She produced a steady stream of papers during that time, trained many students in the techniques and made many contributions to science (see above).

From 1943 to the end of her life she travelled around the world lecturing and visiting scientific colleagues. Her first trip abroad was in 1943 when Kathleen visited the Dublin Institute of Advanced Studies to lecture at the summer school, chaired by Erwin Schrödinger and attended by Eamon de Valera, who was later to become Taoiseach (prime minister).

In 1965, when Thomas retired, the Lonsdales moved to Bexhill-on-Sea, which meant that Kathleen had to commute for five hours each day to work. She retired in 1968 and became an emeritus professor at UCL, but she carried on working and publishing papers to the end of her life. She was ill for some time with cancer and was admitted to hospital in December 1970, but carried on working from her sick-bed. Shortly after celebrating Thomas’ 70th birthday, she died from cancer, on 1 April 1971.

Kathleen Lonsdale was a remarkable person and a world-class scientist. She started off in mathematics, moved to physics and ended up as professor of chemistry, despite saying that she knew very little chemistry, and no organic chemistry. She was encouraged to work in the new field of X-ray crystallography by W. H. Bragg, who with his son W. L. Bragg, did much to remove the barriers to women entering the physical sciences in the 1920s and 1930s. But Lonsdale made the most of this opportunity and her abilities, despite her family background and the heavy demands of her own family life. She said in her characteristically humble way: ‘My own research life has been greatly enriched by having been broken into by periods of enforced change. I was not idle while I had my three children; far from it. But it gave me the opportunity of standing back, as it were, and looking at my work. And I came back with new ideas’.

Lonsdale’s work for peace and for prison reform, in the best traditions of Christian activism, was as significant as her scientific work. She was an activist in the best sense of the word, and she practised this in her scientific as well as in her Christian and social activities. In one of her talks on religion she said: ‘It is necessary to believe that in God’s world there is always a right course of immediate action’. This was a philosophy that she put into action herself and persuaded others around her to do the same. Kathleen Lonsdale is someone we can look up to, not only as a great scientist who achieved much, despite many difficulties, but also as a good human being.