Scientists in Singapore have found out how to produce coloured silk based on the diet fed to silkworms. The discovery has the potential to end the expensive and environmentally harmful methods currently used to dye silk fibres, and could also pave the way for luminescent silk scaffolds for use in medicine.

Ming-Yong Han of the Agency for Science, Technology and Research and colleagues have fed silkworms various dyes, and examined the molecular take-up with fluorescence imaging and spectroscopic quantification.

It has long been known that a silkworm’s diet can affect the colour of the silk it produces. The mulberry leaves eaten by certain wild Thai silkworms, for example, turn their silk gold. But these natural colours are useless for making fabrics because the pigment is contained in the outer layer, a sticky gum called sericin. This layer must be removed to reveal the smooth, lustrous core known as fibroin, which contains no pigment. Researchers have tried feeding silkworms synthetic dyes to achieve coloured silk, yet these attempts have still failed to colour the fibroin core, until now. 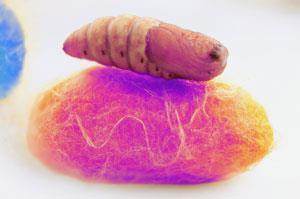 Han’s method changes the silk colour, even in the fibroin core. The team found that the main factor determining success is in the molecules’ hydrophobicity - the degree to which they repel water - and that there is an optimum value of hydrophobicity for maximum take-up. With this knowledge, the researchers identified molecules for intrinsically green, yellow and pink silk fibres, as well as luminescent ones.

Pierre Couble, a researcher specialising in silk at the University Claude Bernard Lyon 1 in France, points out that the Singapore researchers’ paper does not mention how stable the pigments are over time. ’It may be very poor because silk’s protein-pigment interaction is likely very weak,’ he says.

Han’s team says that diet-based pigmentation has several benefits. On one hand there should be no need for the traditional methods, which often involve masses of dye, chemicals and energy. On the other, luminescent silk fibres could be used to create bio-compatible scaffolds for the growth of artificial blood vessels, ligaments and other structures in medicine. ’We are open to discussing the possibility of commercialising this invention,’ says Han.