Worried about food allergens? There's an app for that

A mobile phone app, that scientists are calling iTube, can be used to detect allergens in food samples

Building on their work on a mobile phone – or cell phone – app to detect bacteria, US scientists have now adapted the technology to detect allergens in foods.

The device, developed by Aydogan Ozcan and his colleagues at the University of California, Los Angeles, is a compact and lightweight attachment for a mobile phone’s camera unit, which is used to image tubes containing food samples illuminated by light emitting diodes. ‘If there is an allergen in the sample, the transmitted light intensity changes,’ says Ozcan. ‘By quantifying the transmitted light intensity using a smart application on the phone, we can quantify the amount of allergen in the sample in parts per million.’ 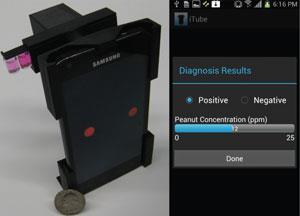 Food allergies affect 8% of young children and 2% of adults, says Ozcan, and allergic reactions can be severe and even life-threatening. While consumer protection laws regulate ingredient labelling on pre-packaged foods, there may still be cross-contaminations that occur throughout the processing, manufacture and transportation of food, he explains. While several products that detect allergens are available, they are complex and require bulky equipment, making them unsuitable for use in public settings. ‘Our platform is mobile, runs on cell phones, and is also quite compact and cost-effective,’ says Ozcan.

‘We envision that this cell phone-based allergen testing platform could be very valuable for parents, schools, restaurants and other public settings,’ says Ozcan. ‘Once successfully deployed in these settings, the large amount of data, as a function of both location and time that this platform will continuously generate, would be priceless for consumers, food manufacturers, policy makers and researchers.’

He adds that the test results of various food products, tagged with a time and location stamp, could be uploaded to iTube servers to create a personalised testing archive, which could provide additional resources for individuals with allergies around the world. A statistical allergy database, coupled with geographic information, could be useful for future food-related policies, for example in restaurants, food production and for consumer protection, he says.