In stark contrast to expectations, researchers have found that the active versions of genes on X chromosomes are more heavily methylated than the inactive versions. Inactive genes are the result of a phenomenon known as X inactivation. X inactivation is the process by which tortoiseshell cats get their characteristic colour patterns. Essentially, every cell in a female mammal shuts down one of its two X chromosomes, in order to avoid overdosing the activity of the genes in comparison to the single copy that every male has (males have only one X chromosome, the other is replaced by a Y chromosome). 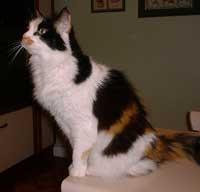 Methylation of DNA was known to play a role in this process, presumably as a silencer. But researchers have now found that the genes on the active, not the inactive, X chromosome are most heavily methylated.1

Previous studies had shown that the promoter region - a specific stretch of DNA that signals the proximity of a gene but is not a part of it - carries more methyl modifications on the inactive X chromosome than on the active one. Based on this evidence, many people assumed that methylation must be a silencing signal. Now, Asaf Hellman and Andrew Chess at Harvard Medical School have investigated the methylation pattern not only of the promoters but also of the DNA that makes up genes.

To their surprise, they found that active versions of genes were most heavily methylated. Control experiments confirmed the established knowledge that in the promoter region the inactive version carries more methyl groups. Additional investigations using human embryonic stem cells suggest that the DNA of undifferentiated cells is heavily methylated throughout. A selective methylation/demethylation process then leads to the characteristic pattern of high and low methylation, the precise meaning of which remains unclear. ’This finding calls for new ways of thinking about connections between DNA methylation and gene activity,’ said Hellman.

Independently, other researchers have obtained similar results with plants, suggesting that methylation can stimulate or block gene activity depending on the context.2,3

’The parallels with our findings in plants are quite striking,’ said Steven Henikoff, a geneticist at the Howard Hughes Medical Institute, US. ’We found that clusters of genic DNA methylation are primarily found in the bodies of expressed Arabidopsis genes, and it led to the idea that methylation is coupled to transcription,’ Henikoff told Chemistry World. ’The preference for methylation of the active allele shown by Hellman and Chess suggests that a very ancient transcription-coupled process is involved that predates the divergence of plants and animals. Most attention in the DNA methylation field has been focused on methylation of promoters, because this can aberrantly silence genes and result in cancer. But methylation of gene bodies is widespread and occurs normally in plant and animal genes,’ he said.