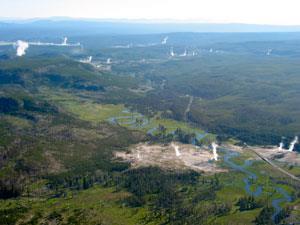 Researchers have found that huge amounts of helium are being released through steam plumes in the US’s Yellowstone National Park, having been stored in the Earth’s crust for billions of years.

Yellowstone sits on a volcanic hotspot, and is well known for its geothermal features such as hot springs and geysers, where water heated by underlying magma is forced up through the surface, along with a mixture of gases. Among these is helium-4 – an isotope of helium produced by the radioactive decay of uranium and thorium in the Earth’s crust. Jacob Lowenstern and colleagues from the US Geological Survey, who were monitoring volcanic activity in the park, calculated that about 60 tons of helium is released every year. This is hundreds of times faster than helium-4 is generated in the crust, and the team say vast stores of the gas could have been building up underground for hundreds of millions – perhaps billions – of years. They estimate the gas began to escape around two million years ago during a series of volcanic eruptions.

Despite helium’s scarcity, the researchers say it is unlikely that the gas released in Yellowstone could be harvested and put to use, as it is within a protected area and commercial extraction would not be economically viable.