Zeolite catalysts under the fluorescence microscope

An imaging technique pioneered by biologists to peer inside living cells can be equally effective at revealing the inner workings of catalysts. Bert Weckhuysen and his colleagues at Utrecht University in the Netherlands, in collaboration with US chemical company Albemarle, have shown that confocal fluorescence microscopy can be used to probe the properties and performance of zeolites, arguably the most important industrial catalysts.

Zeolites are used for fluid catalytic cracking, the process oil refiners use to turn crude oil fractions into hydrocarbon products such as petrol. The synthetic zeolite market is worth close to $1.9 billion annually. Weckhuysen’s group has now shown how the inner workings of zeolite catalysts can be illuminated using fluorescent probe molecules, providing new insights into the way zeolites fail as they age. 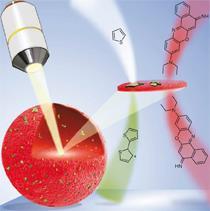 The catalytic heart of the porous zeolite structure at which cracking takes place is the Br?nsted acid sites found in and on its structure. Weckhuysen and his colleagues were able to highlight these catalytically active sites using the reactive small molecule thiophene. Although non-fluorescent as a monomer, thiophene oligomerises in the presence of Br?nsted acid catalysts, becoming fluorescent in the process. When viewed through a confocal microscope, the more brightly a spot in the zeolite fluoresces, the more catalytically active that point in the structure. In addition, the team used a second probe, a non-reactive dye called Nile Blue A, to coat the zeolite surface and so highlight zeolite particles within the catalyst matrix.

This ability to create a detailed map of zeolite active sites is one of the ways in which the technique could improve catalyst performance, says Weckhuysen. For example, a more homogenous distribution of zeolite material within the catalyst potentially improves its cracking activity - something that the fluorescence technique can quickly evaluate. The team also analysed a sample of a real industrial catalyst to probe the way that catalyst particles become deactivated as they age.

’These catalysts are notoriously complex, and incremental advances can be very valuable because petroleum cracking is such a huge throughput process,’ says Bruce Gates, a catalysis chemist at University of California, Davis, US. ’If you can use this technique to gain a small edge in understanding what is going on with the catalyst, and then making the catalysts better, you could see a good pay-off.’

Michael Stockenhuber from the University of Newcastle in Australia says that the approach is particularly well suited to zeolite catalysts, which have acidic active sites in the micrometre rather than the nanometre length scale. ’It’s a good idea - what’s really nice is that you can see the Br?nsted acid sites,’ he says, something that equivalent techniques aren’t able to do. However, competing techniques such as soft x-ray microscopy can offer better resolution, which might limit its application to other catalyst systems, he adds.

Weckhuysen is now seeing just how far the technique can be pushed. ’We know already that we can use it on different zeolite materials,’ he says. ’We also want to know more exactly what is going on within the zeolite domains, and for this we need to further optimise the resolution.’