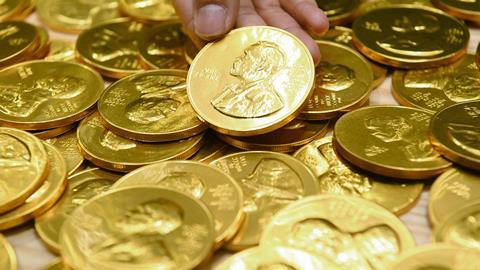 The data behind the Nobel prizes

Since 1901, the Nobel foundation has awarded its annual prizes for chemistry, physics and medicine/physiology to up to three scientists. 613 different scientists have won the prize (some of them twice, like Marie Skłodowska Curie, John Bardeen and Fred Sanger). We’ve taken a look at some of the data behind those 613 people and their prize-winning work – how long do laureates wait between publishing their work and winning the prize? How many citations do those papers gather? And where did the laureates live and work?

We’ve even used the data to build the average chemistry Nobel prize winner.

It’s no suprise that the US leads the way as the country with most chemistry laureates (in terms of where they were working when they received the award), with 76. Germany (in its various guises) is second with 31, and the UK third with 29 laureates.

When it comes to institutions, the picture is a little more complicated. Taking the University of California system as a single insitution takes it to the top with 13. If you count the UK’s Medical Research Council Laboratory of Molecular Biology as part of the University of Cambridge, then the university can also claim 12 chemistry laureates. And the various Max Planck institutes in Germany can claim 11 laureates. It all depends how you define an institution!

Where are chemistry Nobel prize winners born and where do they go?

The left-hand side shows where chemistry laureates are born, and the right-hand side shows the countries they were working in when they won the prize. Where countries and their names have changed over time, we’ve used the modern names for simplicity. It’s clear that the countries with most winners, the US, UK and Germany, are also those to which most laureates moved. It’s particularly interesting that no US-born laureates moved away: all 59 chemistry prize-winners born in the US were working there when they won the prize.

This map of the world tells the story of how science has changed since the Nobel prize foundation started handing out awards in 1901. They plot the birthplaces of chemistry Nobel laureates (red) and the institutions where they did their seminal work (yellow). Before the second world war, nearly every chemistry laureate was born in Europe and performed the work that won them the prize in Europe. Of the 47 chemistry prizes awarded pre-1945 all but three were for work conducted in Europe. The notable exceptions were three chemists in the US: Theodore William Richards at Harvard (1914), Harold Urey at Columbia University (1934) and Irving Langmuir working at the General Electric Company in Schenectady (1932).

After the second world war, the scene was set for the US to take the lead in science. This is clearly shown by the map of the post-1945 chemistry laureates: many of the post-1945 laureates were born in Europe but left for the US, where funding and conditions were more conducive to producing the best science in the world. After 1945, 84 of the chemistry laureates won while working in the US, while 54 were working in Europe.

An interesting pattern also emerges when you look at US chemistry laureates. Much of the movement is east to west. Future laureates born on the east of the country end up doing their prize-winning work to the west in California at institutes like Caltech, Stanford and the University of California system. By contrast, chemistry laureates that left Europe for the US set themselves up on the east coast – presumably to make return visits to family less arduous.

The UK map has its own tale to tell. With 28 chemistry laureates who did their most important work in the UK, the country sits behind only Germany and the US on the laureate leader board. The map reveals the dominance of the ‘golden triangle’ of London, Cambridge and Oxford when it comes to where chemistry laureates lived and worked. For such a small city, Cambridge is particularly well represented with 11 laureates.

Data from The Nobel foundation

How old are Nobel prize winners and how long have they had to wait?

Over the years, the age at which Nobel laureates receive the prize has been edging up. The average age of chemistry Nobel laureates in the 1900s was 59; over the last decade, it was 71. And the age at which chemistry laureates do their prize-winning work also shows a gradual upward trend. It’s a similar story for physics and medicine too, although a recent analysis of Nobel prize data showed that chemists do seem to be late bloomers, doing their prize-winning work slightly later than their peers in the other fields. Shared prizes are much more common nowadays too.

The wait for the Nobel nod is getting longer as well. Technically, the number of years between doing the work and being awarded the prize ought to be 0: the rules of the bequest laid out in Alfred Nobel’s will state that the prizes should be awarded to those who have ‘in the preceding year, conferred the greatest benefit to mankind’. In practice, this almost never happens. Even the very first Nobel prize in chemistry (awarded to Jacobus van ’t Hoff for his work on chemical dynamics) was about 15 years out. In fact, in chemistry only the awards given to Hans Fischer (in 1930, for the synthesis of haemin) and the husband and wife team of Irène and Frédéric Joliot-Curie (in 1935, for the discovery of induced radioactivity) come close to meeting this rule. Frédéric was also the youngest person to receive a Nobel prize in chemistry, at just 35.

At the other end of the scale, Osamu Shimomura had a 46-year wait before receiving his Nobel prize in chemistry (in 2008, for his work on GFP) at the age of 80. But the virologist Francis Peyton Rous waited even longer, bagging his gong in 1966, over half a century after his discovery of cancer-causing viruses. The oldest Nobel prize winner is John Goodenough who won last year’s chemistry prize, for the development of lithium-ion batteries, at 97.

Where are all the women?

In other respects, some things have changed very little over the years. In particular, men have been awarded prizes far more frequently than women. The Royal Swedish Academy of Sciences (which oversees the awards and nominations) has acknowledged the need to address this imbalance and this year made changes to its nomination process that were desgined to encourage a more diverse set of nominees. Last year the academy suggested that more women had been nominated.

Three of the top five papers are for the 1998 prize, which was was divided equally between Walter Kohn ‘for his development of the density-functional theory’ and John Pople ‘for his development of computational methods in quantum chemistry’. Fred Sanger’s 1977 PNAS paper is the most cited Nobel prize winning paper of all time across all three science disciplines. The 50,000 citations dwarfs the next most cited: Kohn’s 1965 Phys. Rev. paper and Geim and Novoselov’s 2004 Science paper (for the 2010 physics prize) both have around 37,000 citations.

The number of citations to Nobel prize winning papers for chemistry, physics and medicine

Each point represents a Nobel prize winning paper, with position on the y-axis showing how many citations it received. The distribution and median number of citations to prize-winning papers is remarkably similar between disciplines: for chemistry, the median is 529; for medicine, it’s 475; for physics, 495. The graph excludes articles with more than 5500 citations for clarity; there are around 10 for each discipline.

How do the most-cited papers get cited?

Sanger won the Nobel prize (for a second time) very soon after his 1977 PNAS paper was published. It rapidly gathered citations for the next 20 years as his technique was widely used, making it the most highly cited chemistry Nobel-winning article. But why do citations dwindle after their peak in 1996? Was it a change in scientific techniques or merely citation habits?

Neher and Sakmann’s paper (published in the Pflügers Archiv European Journal of Physiology) on patch-clamp techniques in 1981 garnered them the medicine prize 10 years later, for ‘their discoveries concerning the function of single ion channels in cells’. It is the most highly cited medicine prize-winning paper, and its citation profile follows that of Sanger’s paper remarkably closely, again declining after a peak in 1996.

The most highly cited paper to win a physics Nobel is more recent, however. Novoselov and Geim’s 2004 graphene paper in Science won them the prize in 2010. Did their paper reach its citation peak in 2017? With 2019 data still incomplete, it may take a year or so to tell whether its citation rate will decline like Sanger’s and Neher and Sakmann’s papers.

An interesting comparison can be made with the third most-cited physics paper, on high Tc cuprate superconductors, published in 1986 in Z. Phys. B. Its authors, Georg Bednorz and Alex Müller, received the prize the very next year. The paper’s citation profile reflects the intense and rapid interest in the field, following a steady waning of popularity, levelling off at around 200 citations a year.

Looking at all the data, can we build a picture of the ‘average’ chemistry Nobel laureate? The answer is yes, but how useful is it? Judge for yourselves…

The average chemistry Nobel laureate is an American man, probably called Richard, John or Paul. He is 57 or 58 years old and works at an institution in California (UC, Stanford or Caltech). His prize-winning work was published 16 or 17 years ago, in Nature or JACS, and has been cited 529 times to date.

Know anyone who fits that description?