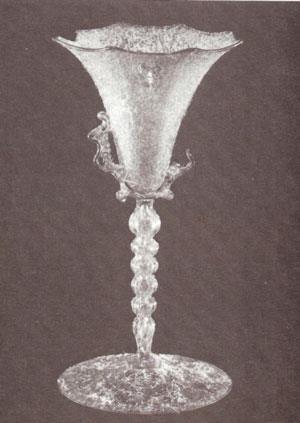 Researchers at Imperial College and conservationists at the Victoria & Albert Museum (V&A) in London have been studying decay in some 400 glass exhibits, including 17th century Venetian vases and goblets;  the decay is characterised by a haze of cobweb fractures in the glass called crizzling.

The onset of decay is marked by a gradual frosting, resulting from the deposition of hygroscopic alkali metal ions on its surface after ion exchange with atmospheric hydrogen ions. In high humidities the surface of the glass becomes slippery – described as ‘weeping’.

As deterioration progresses, more alkali metal ions are leached outwards from the near surface glass layers and are replaced by smaller hydrogen ions. This surface contraction imposes high tensile stress and cracking of the near surface layer.

Using energy dispersive x-ray analysis (EDXA) and secondary ion mass spectrometry (SIMS) the researchers confirmed that the crizzling was a result of surface contraction and resolved fine details on the surface fissures. A cation profile was obtained, showing the kinetics of H+, Na+, K+ and Si2+ exchange at the glass surface.

This research, using Venetian glass analogue materials, is concentrating on ways of preventing, rather than curing, crizzling. The recent interest in reversible curing treatments, however, could herald a facelift for glass collections at the V&A.