30 years ago: The oldest operational PerkinElmer spectrophotometer in the UK is found 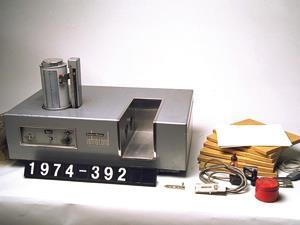 To celebrate its silver jubilee, PerkinElmer Ltd recently ran a competition to find the oldest operational instrument manufactured at Beaconsfield, where the company’s UK branch was established in 1957. This was won by the chemistry department at Reading University with its model 137 Infracord infrared spectrophotometer, serial number 104, which was installed in 1958.

Reading’s Infracord has been in constant use since 1958. Until 1965 it was mainly used for research, but from then on it was used for teaching undergraduates.  Since 1972 it has been taken to over 50 schools in southern England for demonstrations to sixthformers and now functions mainly as a standby instrument.

As winner of the competition, Reading University received a new PerkinElmer model 983 infrared spectrophotometer, which will be used mainly for research purposes.

Ed. Last year, the overall PerkinElmer brand celebrated its 75th anniversary after the company was founded

in 1937 by Richard Perkin and Charles Elmer as an optical design and consulting company in Norwalk, Connecticut, US. In the UK, the Beaconsfield site still exists and the company still develops spectrometers. There is an interesting article on the history of the PerkinElmer Model 137 ‘Infracord’ (and its progeny) by Mike Ford, Int. J. Vibr. Spec., 2002, 6, 4.