A night at the beamline

Eminem, Game of thrones and the ever-present threat of diamonds crushing

For 24 hours a day, six days a week, electrons circulate within the Advanced Light Source storage ring in Berkeley, US. These rip along at 99.999995% the speed of light, directed and perturbed by magnetic arrays, their radial deceleration producing valuable photons of incredible brightness. At 40 experimental endstations around the ring, called beamlines, this light is gathered, monochromated and shaped to illuminate samples for spectroscopy, microscopy, tomography and –my favourite – diffraction.

Beamline 12.2.2 specialises in extreme conditions diffraction. Usually the ‘extreme condition’ is high pressure, which is produced by placing a sample within a hole drilled in a sheet of metal, usually not larger 250 micrometres, which is then sealed top and bottom with diamonds (a diamond anvil cell, or DAC). To keep the diamonds from just crushing the sample chamber, it is filled with a gas or liquid. Finally, pressure calibrant is added – gold and platinum are both used, but for room temperature work, ruby is favoured. 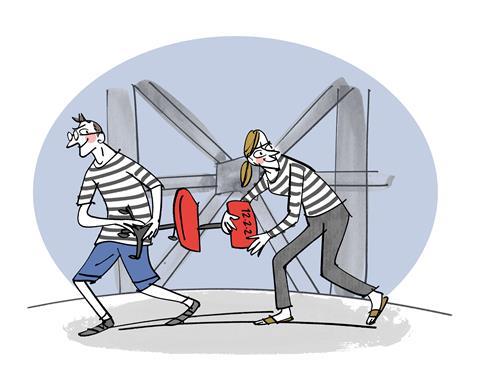 It all sounds very orderly. It is the exact opposite. Everything depends on the lovely, messy, dedicated humans who run the beamlines. High pressure diffraction doesn’t conform to a set schedule – you may know what pressure things will change, but you can’t rush the process of imparting gigapascals of pressure on your sample. One fell turn of the wrench can mean your sample chamber collapses, your sample is crushed, or worst of all, you hear the noise. The Noise. Diamonds, as everyone knows, can only be broken by another diamond. Those who have heard The Noise emanating from diamonds colliding and annihilating never forget it.

As a semi-jaded beamline scientist, I rarely approach a late night shift with much enthusiasm. Yet that’s where I found myself one Autumn eve, tuning up the beamline to collect data with two students. Noel was a chemist, Claire a geologist; this crystallographic rivalry is real and unending. After Instagramming a picture-perfect San Francisco Bay sunset, we got down to business. Each of us had a loaded DAC, so the game plan was that while one person was collecting data, the others would be adjusting the pressure while analysing data from preceding pressure steps.

This rotation method is efficient and produces excellent data but has its drawbacks – downtime is difficult late at night. Fortunately, speakers were hidden in the cabinet over the data analysis computer bench. Beamtime playlist rules are simple: keep everyone awake. Dance music, rap, alternative rock and the occasional country song have all been crucial parts of the experimental plan, with Sia, Nicki Minaj, Eminem and Muse all essential members of the research team. Inevitably, there was midnight dancing.

As the hours ticked away, the evidence of exhaustion became more tangible. The light-hearted banter took on slightly harder edge and was received with less laughter. (The dark mood may or may not have been precipitated by the fact that we decided to stream Game of thrones on one of the data analysis computers.) Pressures crept higher, with every sample inching towards its unique goal. This is the part of the experiment where the threat of catastrophic failure – and The Noise – was greatest. Spooked, we all turned our Allen keys more gently, straining our ears for any untoward creaking or cracking. None came. Relieved, we waited for one of the DACs to be back on the beamline and followed the ring round to the beating heart of the facility: the Advanced Food Source. Calories consumed on beamtime have a large complex component, and can be ignored in real world summations, or so I am told.

Time to amble back. Past sector 5, where the protein crystallography beamlines hummed away, its users logged in remotely. Past sector 6 where, among vast tracts of empty space waiting for a beamline to be built, we noticed there was a chair labeled 12.2.2. Chair rustling is a despicable crime and had to be immediately rectified. Then, chair in hand, back to our beamline. Outside, the sky had begun to lighten with the impending dawn.

Suddenly, I felt much older and much more tired. Looking over my beloved spreadsheet detailing the night’s data points and enjoying a pleasing curve of decreasing unit cell volumes, I decided I was done. After receiving assurances from both the students that they would get back to their residences safely, I said my goodbyes and stepped out into the chilly twilight, warmed by a sense of mentoring satisfaction.

Beamtime success can be measured many ways: by goals achieved, by data sets measured, by resulting publications. But the intangible factors of fun and friendship should always be part of the equation. A night at the beamline might seem to drag on, but the memories stay with you forever.