Finding a recipe for road-friendly rubber

Vulcanisation, the process by which rubber is heat- and pressure-treated with sulfur, was a crucial breakthrough which allowed the material to rise to ubiquity and evolve into a commercial powerhouse. Without the treatment, natural rubber is a soft, sticky substance when warm, which reverts to an equally useless brittle state when cold. Once vulcanised, thanks to the cross-linking of its polymer chains with sulfur, rubber becomes the durable, elastic compound which carries us dutifully along the road. 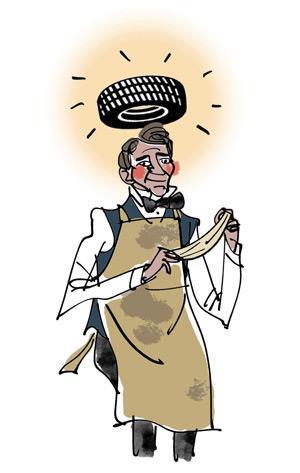 So which dedicated academic, and which devoted embodiment of the scientific method, was responsible for this momentous step forward? The year is 1839; enter Charles Goodyear.

Goodyear, a man of no formal chemical or scientific training, had been conducting experiments to improve rubber since 1834. In his quest to transform the material into something useful he had attempted treating it with, amongst other things, magnesium oxide, quicklime, turpentine and nitric acid; all to no avail.

By 1838 Goodyear, who had already spent a considerable amount of time in prison for debts accumulated in previous failed business ventures, was living destitute with his family in the US town of Woburn, Massachusetts. It was here that he began to use sulfur in his experiments.

The precise details of the moment of inspiration are, as ever, somewhat elusive but suffice to say that Goodyear came to accidentally observe the effects of heat on a mixture of sulfur and rubber. The resultant material was resistant to melting and seemed, in his own words, ‘perfectly cured’. For Goodyear the discovery could not come soon enough, but the process of commercialising his invention proved far more difficult than he anticipated.

Having finally been granted the US patent (number 3633) for his invention on 15 June 1844 following a lengthy legal dispute, Goodyear struggled to see any meaningful income arise from it. Having focused so much time and attention on patent acquisition and product development in the US, he was narrowly beaten to the UK patent for vulcanisation by a competitor claiming independent discovery.

Despite this, Goodyear exhibited his various vulcanised rubber goods to a European audience in the hope of attracting investors. In this he was unsuccessful, and his European venture ended somewhat abruptly in 1855 with him spending time in a Parisian jail for unpaid debts.

Goodyear died in 1860 having never seen the true commercial potential of his discovery realised. The Goodyear Tyre and Rubber Company was named posthumously in his honour upon its foundation in 1898. His patent would, however, come to provide comfortably for his surviving family, the coming automotive boom seeing its value rise considerably.

Goodyear’s discovery has been labelled one of history’s greatest accidental discoveries but this, one might feel, is to betray his dedicated work and perseverance. He spent five years trialling various treatments and getting nowhere. But by no means were these years wasted, as the elimination of failed processes was essential. It is often easy or convenient to undervalue the insight negative results can provide.

The persistence displayed by Goodyear in the face of failure and destitution contradicts completely any dismissal of his discovery as a ‘happy accident’. It is instead a testament to all that can be achieved through the single-minded dedication to solving a problem.