It takes all kinds to make a lab, or at least that’s how it seems when you look around one closely. And while the personality types represented in science don’t exactly mirror the general population, they still cover a wide range. There’s one particular division that I have in mind, though, that very much affects the kinds of research results that come out. For want of better terms, I’ll call the two types ‘scientific extroverts’ and ‘scientific introverts’. These aren’t meant to reflect differences in dealings with lab-mates, but rather dealings with scientific problems and research projects. 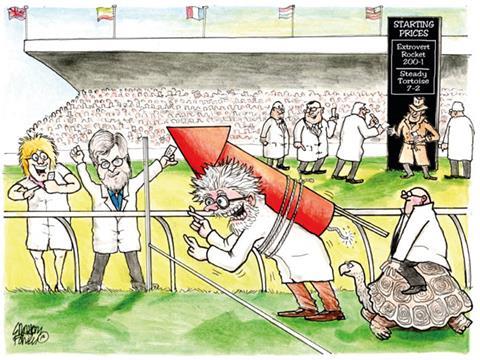 First, the extroverts: they’re the ones who don’t mind the high-risk, high-reward programmes. They know that the odds are against them, but they like the idea of tackling something hard. They know that any success will draw attention to their work, and that’s fine with them.

The scientific introverts are the ones who’d rather keep their heads down and work on things that aren’t so flashy. They don’t like the pressure of a high-profile position, and don’t really do their best work under those conditions. These are people who come in, get their work done and are satisfied when they’ve done a good job of it.

I’ve heard people express themselves in just those terms: ‘Don’t give me things to do that could make a big, splashy failure.’ The possibility of a big, splashy success was clearly not enough of an inducement. And that’s probably another valid way of looking at these two types: one of them expends effort mainly to avoid failure, while the other chases after success (perhaps to a fault).

I’ve worked with plenty of examples of both types. It’s tempting to speculate that the introverts actually get more work done, in aggregate. Their productivity tends to be more even, and they can plough through long lists of tasks at a steady pace. But ‘more work’ is a tricky concept, as not all work is created equal. The high-risk people occasionally make those long odds pay off, and when they do, the result is something that the introverts never would have discovered, because they never would have even tried the experiments in the first place. But of course, one has to be willing to put up with long periods during which not many results are coming out at all.

I would not want to stock a research department with a monoculture of either type. If I had to choose, though, I’d probably pick an assortment of extroverts, in the hope that, if I could gather enough of them, someone’s ideas would pay off often enough to keep the lights on and the bills paid. I worry that a solid block of don’t-make-waves people would be too cautious to come up with anything really useful. But that’s my own prejudice – my personality is very much on the scientific extrovert side. I have to admit that an entire research department made up of my clones is an unnerving prospect and would probably be even more unnerving for anyone financing the work.

With that in mind, I can let you in on one of the extrovert’s secret weapons. When a project is already thought to be facing long odds, it doesn’t surprise people as much when it doesn’t work. And the people who were trying to make it work don’t necessarily have to soak up as much of the blame. They gave it a valiant effort, but who was expecting that crazy idea to come through, anyway? Whereas the mainstream projects, the big ones that people are counting on – well, the odds of them working still aren’t all that comforting, to be honest. They may, in fact, not be much more certain than those allegedly crazy projects, but when they fail, there’s a lot of blame to be distributed. And as anyone who’s worked in any kind of organisation knows, it will not be distributed in a smooth and even application. Large clumps of it will adhere to those unlucky enough to be in its path.