Graduate research is likely the most risky time of a chemist’s career, says Derek Lowe

How much of a risk is it to work in an organic chemistry lab? Back when I was first beginning bench work in graduate school, I was home during the holidays and telling some lab stories. These fell into the usual category of ‘lunatics I have known and their life-threatening ideas’. I think that my father appreciated them, but my mother wasn’t so sure. ‘This work sounds really dangerous,’ she said, with a worried look on her face. 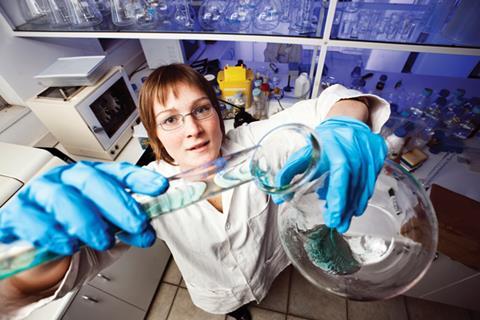 How many health and safety issues can you spot in this picture?

I thought about that for a moment, and told her that the most dangerous thing I probably did all year was drive back home to see them: just over a thousand kilometres, with the Smoky Mountains in the middle. While I don’t think she was convinced by my reasoning, I still believe that I was right. But at the same time, she had a point: looking back on it, I was right in my peak years for danger in the lab, and I would propose that graduate school is the most dangerous period for most chemists.

Nothing can be made foolproof, because the fools are too ingenious

Several factors come together to make it so. Sheer time in the lab is a big one, of course. For most people, the grad school and postdoc years are the most relentlessly laboratory-centric of their lives – working days, nights, weekends and other people’s holidays. To make things worse, the more hours you put in, the less alert you’re likely to be. Several of my most idiotic manoeuvres during that era took place at around two o’clock in the morning – surely no coincidence. I have an old t-shirt that I keep to remind me of those days – it’s a nondescript dark blue, except for the vivid sulfuric acid-induced claw marks streaked across the fabric. I’ve never made that mistake again, and consequently have also never felt the need (and it was an urgent need, believe me) to pour saturated sodium bicarbonate all over my chest again, either.

That vivid memory illustrates another aspect of the problem: just as lab hours per calendar day (and perhaps also hours worked alone) are at their highest, one’s own experience is nowhere near at its peak. Graduate school is where chemists encounter a lot of reagents and procedures for the first time, and not all of these encounters will go smoothly. This is when one might find out, for example, just how remarkably air-sensitive trimethylaluminium is (if there isn’t a flame burning from the end of the syringe needle, the bottle has probably gone off), or just how long a large aqueous phosphorus oxychloride workup can sit around before it suddenly erupts all over the inside of a fume hood (several hours, damn it all).

The presence of your peers in the lab is, unfortunately, another danger. Everyone else is making mistakes of the same calibre, or even worse. Graduate school is when some students are shaken out of the field entirely, which means that never again will you be surrounded by quite so many people who perhaps shouldn’t be there at all. Undergraduate project students often don’t help tone things down very much, as they plug solvent still heaters directly into the wall outlets and squirt ethanethiol out over the open bench. Almost everyone who makes it through to a doctoral degree will have had a chance to appreciate the saying that nothing can be made foolproof, because the fools are too ingenious.

With time, these folks get more experienced or get out, and so do you. Industrial labs frown on people working strange hours alone, as well they should. And if you go into academia, you have plenty of office time to take you out of the lab. All the risk indicators start turning in the right direction. There are dangers of complacency, of course, but they’re not quite as sharp and immediate as the dangers of cluelessness. Working in the lab always has its hazards, but you at least have a better idea of what they are and how to avoid them. My mother was still relieved when I finished up my doctorate, though. And, come to think of it, so was I!