An end to bubble puzzle trouble?

Has a 20-year-old problem finally been solved, asks Philip Ball

Nanobubbles have perplexed scientists for over two decades. These tiny domes of gas just a few hundreds of nanometres across are seen on hydrophobic surfaces when they are submerged in water that is super-saturated with dissolved gas. 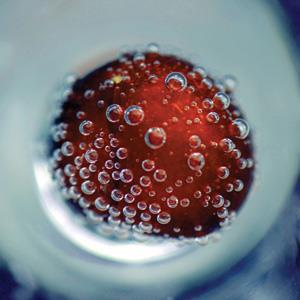 Their formation is no surprise: the dissolved gas nucleates into bubbles just like it does on the inside of a glass of freshly poured champagne, as the liquid releases its excess of gas. But these bubbles seem to defy conventional thinking by persisting for up to weeks at a time, when the internal pressure of the bubble is predicted to be so huge that they should disappear within microseconds.

Nanobubbles’ resilience has been a highly controversial issue, but their seemingly anomalous longevity may at last have an explanation. At a conference in October hosted by the Shanghai Institute of Applied Physics, fluid physicist Detlef Lohse of the University of Twente in the Netherlands – reporting on joint work with chemist Xuehua Zhang from RMIT University in Australia – declared the problem solved, and in a new preprint he has put the finishing touches to that solution.

Nanobubbles were first inferred indirectly from measurements of the force between two hydrophobic surfaces immersed in water. In 1994, Phil Attard of the Australian National University and colleagues measured an attractive force that persisted even for surfaces a few hundred nanometres apart.1 What’s more, it was discontinuous – a series of jumps as the surfaces were brought together or separated. The researchers attributed it to the nucleation of tiny bubbles bridging the surfaces and pulling them together by surface tension.

Subsequent atomic force microscopy studies seemed to reveal the presence of circular bubbles shaped like spherical caps.2 There followed a long debate about whether these structures were real or just an artifact of the technique. But even though there are risks of being misled by artifacts – teams at the Shanghai meeting reported that some putative nanobubbles are blobs of polymer released by plastic tubing – it does seem agreed now that nanobubbles are real. It’s not clear, moreover, that they are specific to hydrophobic surfaces: there are claims of observing them at hydrophilic surfaces too.3

One big question is whether they are static or dynamic, since the Laplace equation, which relates the bubble’s internal pressure to its radius of curvature, can’t adjudicate the latter. One of Lohse’s early ideas speculated that nanobubbles might be replenished by gas feeding into the edges from an adsorbed layer on the surface. But now he thinks that nanobubbles don’t require anything so fancy. All that is needed to account for them, he says, is a careful consideration of gas diffusion, gas solubility and the three-phase contact line where the bubble interface meets the solid surface.

In particular, Lohse and Zhang argue, we need to take account of how this contact line gets ‘pinned’ by inhomogeneities in the shape or chemical composition of the surface. This effect is familiar for liquid drops: as they spread on a surface, the shape can become irregular as parts of the advancing edge get stuck.

As gas diffuses out of a nanobubble because of the Laplace pressure, Henry’s law relates that pressure to the concentration of dissolved gas right at the bubble surface. For emptying to proceed, the concentration has to fall below the equilibrium value by gas diffusing away through the water. Given the boundary conditions – the gas concentration far from the bubble – it’s straightforward to calculate how fast this diffusion should happen.

But if the contact line of a nanobubble is completely pinned all around its circumference, the bubble changes shape as it deflates. It becomes flatter, and its radius of curvature increases, decreasing the Laplace pressure. This, Lohse and Zhang argue, is entirely analogous to the treatment of an evaporating coffee stain, where pinning also seems crucial.4 Extending that analysis to this case, Lohse calculates the rate of change of the bubble’s mass. This shows that, if the water remains over-saturated in gas, a stable equilibrium can be reached for a particular contact angle of the nanobubble at which the gas influx due to supersaturation balances the outflux due to Laplace pressure.

Whether or not such an equilibrium exists depends on the extent of the pinning, and also on the boundary conditions: if the dissolved gas can’t escape, the driving force for gas diffusion away from the bubble surface may vanish and the nanobubble can persist indefinitely. But for realistic values of the parameters in a macroscopic open vessel, it turns out that nanobubbles will persist for hours or days before eventually shrinking and vanishing, just as the experiments show.

Given the history of this topic, it would be surprising if everyone is persuaded by Lohse and Zhang’s analysis. But in any event it illustrates one thing: many real-world problems can’t be conveniently handled by simple equilibrium approximations or by assuming ideal materials, but demand a careful consideration of imperfections, rates of change and boundaries – and that we actually put the numbers into the equations.