Chemical theory assumes that substances move passively during reactions – but data from organic reactions are the latest to undermine this dogma. Steve Granick’s team at the Centre for Soft and Living Matter in Ulsan, South Korea, sought to disprove the controversial idea of enhanced molecular mobility during chemical reactions. Instead, they reinforced it.

‘People normally use diffusion coefficients as something that depends only on things like viscosity and shape of the molecule,’ Granick says. ‘Chemistry is unconnected. To find that each modifies the other is a wonderful thing. It’s a new idea.’

The strange idea that some substances can somehow move faster than random collisions in Brownian motion originates from experiments with fluorescently-labelled enzymes. Granick first heard claims that when some enzymes do their jobs as biochemical catalysts they seem to diffuse faster at an American Physical Society meeting in 2017, he recalls.

Not every chemical reaction will make this happen, but it can happen under the right circumstance

‘This sounded to me so important, if true, that when I came back from the meeting, I persuaded people working with me to do some experiments just to make sure that it was wrong,’ Granick says. ‘And it turned out that we got the same answer. It struck us, why would it be restricted to these biological systems? What about chemical reactions more generally?’ Wang was very sceptical, but agreed to take a look ‘just to make sure it was wrong’, Granick says.

This also provided a chance to move a field Granick describes as ‘riddled with controversies’ forward. Rather than much-disputed fluorescence techniques, Wang mainly used pulsed-field gradient NMR spectroscopy to study substances’ abundance and mobility. ‘Huan’s work was an attempt to break out of the vicious circle of arguing back and forth,’ Granick says.

Pulsed-field gradient NMR imposes some limitations, eliminating eight reactions screened from consideration. However, it was able to confirm known diffusion coefficients for the other reactions before and after they were complete. By comparison, diffusion coefficients for various reactants increased by differing amounts, which gradually declined as reactions progressed. The greatest initial increase Wang recorded was a 60% boost for protons initially attached to propargyl alcohol used in a click reaction. The team also used a microfluidics-based approach to support these findings.

The reason for the boost is still unknown. Wang, Granick and their colleagues found that the heat the reactions produced could only explain very little of the effect. However they also found that to get the diffusion boost reactions have to exceed a certain energy release rate. Wang notes that her experimental findings also show the diffusion rate boost scales with a reaction’s energy release rate, which ‘shows some generality’. 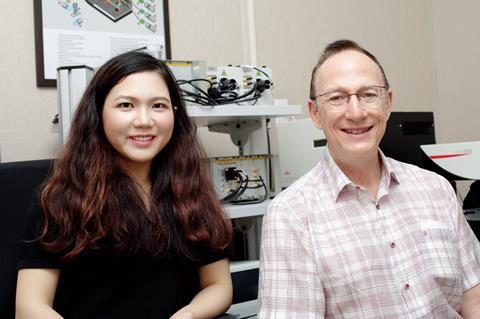 Huan Wang, Steve Granick and their colleagues sought to disprove the idea of enhanced diffusion during chemical reactions, but ended up reinforcing it

Granick concludes that ‘not every chemical reaction will make this happen, but it can happen under the right circumstance’. ‘It also can give some perspective on why the people in the enzyme field can never agree, because it doesn’t always happen,’ he says.

Organic chemist Daniel O’Leary from Pomona College in Claremont, US, highlights prior NMR studies on enhanced diffusion. Two such studies argue that the effect is an artefact due to convection. O’Leary notes that Granick, Wang and colleagues were careful about convection, but would find the research more convincing if they had taken a previously-used approach that measures temperature during the diffusion NMR measurements. He predicts that further experiments ‘will lend evidence for a more pedestrian explanation’.

However, theoretical physicist Ramin Golestanian from the Max Planck Institute for Dynamics and Self-Organization in Göttingen, Germany, and Oxford University, UK, says that the way that Granick’s team seeks to rule out convection ‘appears sound to me’. ’I regard their work as an exciting development in the field that clears the way for more discoveries.’