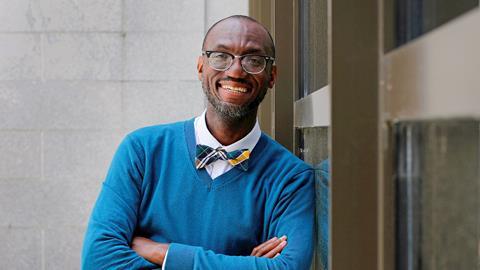 When the 2022 Nobel prize in chemistry winners were announced, it wasn’t just the reaction videos from Bertozzi, Meldal and Sharpless that I was keen to watch.

Andre Isaacs – an associate professor at the College of the Holy Cross in Massachusetts, US, who is better known as @drdre4000 to his nearly 400,000 TikTok followers – dropped his reaction video a few hours after the announcement. Wearing his iconic rainbow tie-dyed labcoat, Isaacs concisely shared the science of both click and bioorthogonal chemistry, before reflecting more peronally on the news.

The 45 second-long video exemplifies Isaacs’ skill in weaving punchy science communication with joyfulness, warmth and inclusive messaging. ‘Basically, you can have chemistry happening at the same time as biology without impacting the biological processes,’ shared Isaac as a succinct summary of the utility of Bertozzi’s chemistry.

Isaacs was drawn to TikTok as a platform for sharing science because of the people that he wanted to reach.

‘I think academia can be a challenging space, and I find that I operate best outside of the traditional academic space in terms of reaching people in the community,’ says Isaacs. ‘And so for me, engaging people in Gen Z was a more productive use of my time, and one that I felt would be more rewarding.’

Initially, Isaacs wondered what colleagues in the broader chemistry community would think about his TikTok content but found responses to be ‘overwhelmingly positive’.

‘I think people recognise that there’s a problem in the scientific community in general where you know there is that professor student divide … where professors are on a pedestal,’ explains Isaacs. ‘A lot of my colleagues were really happy to see that I was showing a different way of engaging students; one that treated them as equal collaborators and one that brought a bit more joy to the exercise of doing science.’

‘Joy’ is the first word that springs to mind when I think about Isaacs’ TikTok, something that couldn’t be more important to spread to the next generation of young chemists and for the broader community to feel when hearing about our subject. Many of Isaacs’ videos embody this joy in choreographed dance routines and lip syncs, filmed with students in the lab or lecture theatres.

Isaacs’ videos connect into popular culture (Bridgerton costume party for the lab photo anyone?), chemistry relating to queer culture (explaining the chemistry and biological effects of poppers) and social justice (Black Lives Matter), and he keeps a close connection with fans and followers through the comments.

Isaacs shares much more than science in his content, also interacting with his followers about important societal issues. As a Black man in science who is a member of the LGBTQIA+ community he also shares his identity and issues affecting the communities to which he belongs.

‘There are moments in my life … when something is happening in the world or in the news that kind of reminds me of some part of me that might be suffering as a result of that,’ he shares. ‘Oftentimes that inspires me to highlight that identity.’

Whether discussing chemistry, dancing or speaking about issues such as mental health, racism or queer inclusion in science, Isaacs is always unequivocally himself. His authenticity is part of his broad appeal as a TikTok star and a university educator.

‘I poke fun of myself in class all the time, but I bring my authentic self to class,’ says Isaacs. ‘I talk about how science makes me feel … I share myself in the way I authentically dress – I don’t do the whole khakis and long sleeve shirts.’

Isaacs believes that a lot of professors don’t allow themselves to be completely authentic for fear ‘they end up on the fringes of the field’ by not ‘conforming to the perceived expectations of their colleagues’.

‘Because of that, [academics] might not allow themselves to be authentic and show that vulnerability in the classroom,’ he says. ‘Students want to know that the person who is educating them is someone they can relate to … someone that has challenges like they do, that has things they need to work on, that misses deadlines like they do.’

By being vulnerable and authentic with students and TikTok followers alike while sharing science and spreading joy, Isaacs fosters a deep sense of belonging for those lucky enough to enter his classrooms or explore his videos.

@drdre4000 And after they did me so dirty, I still wrote them a cute exam. #chemistry #college #professor ♬ 2 Be Loved (Am I Ready) - Lizzo