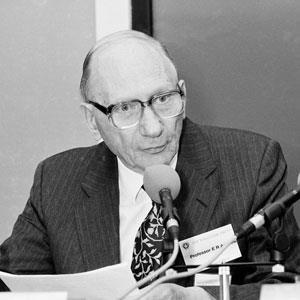 Getting ahead in life is not just a matter of talent. A little advertising never hurts and, as politicians have taught us, a little spin goes a long way. Yet until the rise of research assessment and ranking, such behaviour in academia was seen as a bit vulgar – a true scientist just got on with it. Edward Raymond Andrew was a perfect example of this quiet and focused approach.

Born in Lincolnshire, UK, Andrew was an excellent student and, thanks to scholarships, found himself studying at Pembroke College, Cambridge. Here his PhD supervisor, David Shoenberg, asked him to present a group meeting on the newly discovered NMR. This led him to do a postdoc with Edward Purcell, one of its co-discoverers, where Andrew began to investigate the motion of solid-state hydrocarbons.

After becoming a lecturer at St Andrews University, Andrew built his own spectrometer with a 600kg magnet to study solid cyclohexane and benzene, determining the relative contribution of motion and dipolar coupling to the spectral line shape by carefully deuterating the samples. Measuring T1 relaxation times allowed him to extract activation energies for the reorientation of the molecules. For urea, Andrew was able to prove the planarity of the molecule and determine the position of the hydrogen atoms that had so far eluded the efforts of x-ray crystallographers.

In 1954 he moved to the University College of North Wales, Bangor, with a contradiction on his mind. American physicist John Hasbrouck Van Vleck suggested that the second moment of the line shape (the spectroscopic equivalent of the moment of inertia) should be independent of molecular motion; however, experimental work suggested that random molecular motions gave rise to narrowing of the spectra. Hoping to resolve this paradox – after all, Van Vleck was one of the towering figures of magnetic phenomena – Andrew and his students began to develop their own theory. They concluded that, were the sample to be rotated, this coherent motion would lead to a series of narrow satellites centred around an average peak.

On a visit to Aberystwyth, he started talking to physicist R M Davies, who was using high-speed photography to record the propagation of stress waves in vibrating solids. Davies exposed photographic film to flashes of light generated by spinning a mirror at high speed in front of an arc lamp. Davies showed Andrew how it was done; he had got the elegant design from the American physicist Jesse Beams.

Beams was also an exceptionally gifted experimenter who had moved from optical studies using rotating mirrors to the development of ultracentrifuges. Spinning a shaft was, of course, old hat. But as turbine engineers had found to their cost, the faster the rotor was spun, the more carefully it had to be balanced to minimise vibration and protect the bearings holding the drive shaft. In 1883 the Swedish engineer Gustaf de Laval patented a flexible shaft that allowed steam-driven turbines to spin faster and with greater efficiency. By the 1920s, as centrifuges began to be used for biological studies, the need for even higher speeds was apparent. 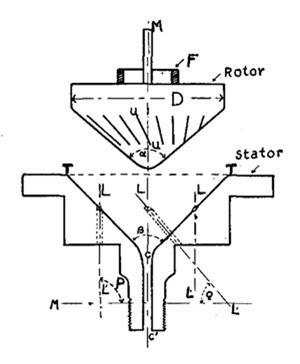 Working in Brussels, the French chemist Émile Henriot and aeronautical engineer Eugène Huguenard did away with the drive shaft altogether. The sample was held in a cone-shaped rotor with minute flutings. The rotor sat in a stator equipped with four tangential openings, through which compressed air was blown; the rotor then lifted and started to spin. As the speed increased, pressure reduced and Bernoulli’s principle resulted in a downward force on the rotor, holding the rotor stable. This was the design adopted by Beams who, when later co-opted by the Manhattan Project in the second world war, used it to develop centrifuges for the isotopic enrichment of UF6.

Back in 1956 Wales, Andrew now had a way to spin his samples. With a Beams-type spinner sitting between the poles of their magnet, he and his students observed narrowing of the 23Na peaks in the spectrum of table salt. It was only then that they spotted a crucial term (3cos2?–1) in the equations for dipolar coupling that depended not just on the distance between the spins, but also the angle between the spins and the magnetic field. This implied that, were the sample spun at an angle of precisely 54.7356°, the dipolar coupling would vanish. When Andrew and his students laboriously manoeuvred their massive magnet round to the correct angle, the spectrum miraculously resolved into a series of sharp lines. In the US, the American physicist Irving J Lowe reported the same thing. The effect was so spectacular that, on seeing the data, the Dutch physicist C J Gorter named it the ‘magic angle’. A new era in solid-state science had started; today rotors spinning at 70kHz are used by structural biologists as well as solid-state scientists.

Andrew later became one of the pioneers of magnetic resonance imaging. He probably missed getting a Nobel prize by a whisker. A modest, thoughtful man, perhaps he felt that his work spoke for itself, for he never championed it in public; ironically, a man who devoted his life to nuclear and mechanical spin never ‘spun’ his own work.

How do you like your science? With spin, or without?

I am very grateful to John Meurig Thomas for his reminiscences and to Dan Raleigh for advice.