I found the article ‘The art of alternatives’ very interesting. It provided an excellent account of using cell cultures etc to assess the toxicity of largely pharmaceutical chemicals. However, there is a major shortfall – it makes no mention of ecotoxicology. Most chemicals, during manufacture or use, will find their way into the aquatic environment. 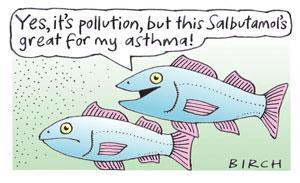 This is especially important when drinking water is abstracted from lowland rivers receiving sewage works effluent. The quantities of pharmaceutical chemicals are low, but may still cause problems for vulnerable sections of the population.

I have a number of questions and readers’ views would be appreciated:

Can the techniques outlined be used as an alternative to fish testing?

Would the Reach (registration, evaluation, authorisation and restriction of chemicals) regulations permit cell culture tests for industrial chemicals in place of animal tests?

The range of both fish tests and invertebrate testing is very wide and poorly harmonised. Could cell cultures replace such tests?

Also, in the article ‘Food agency acts on foetal brain fears’ a Bayer spokesperson is reported saying that ‘[the European Food Safety Agency] has taken a decision to recommend changes to the regulatory assessment of imidacloprid, mainly based on a set of simple cell culture experiments’. Is this an appropriate use of these tests?

I would like to share some of my recollections from my time at the Atomic Energy Research Establishment (AERE) in Harwell, UK.

In 1966, the UK Minister of Technology permitted government departments for the first time to earn money for their services, albeit under strict restraints. Harwell put several of its services on the market, including the Hazardous Wastes Service (HWS), which started in 1969 led by Frank Feates.

One of its first jobs was asbestos removal from the ceiling of the Victoria Air Centre in London. This had to be done while customers were still below and so required careful planning and control. Knowledge of radiation requirements was used to implement similar precautions and working practices, resulting in competent decontamination and a number of working methods for dealing with chemical hazards. 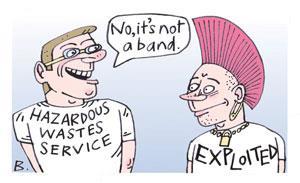 When the Deposit of Poisonous Wastes Act was hurriedly written and enacted in 1972, (after drums of cyanide were encountered by children on a landfill site) the service quickly reacted to its provisions.

Several sections operated: the Waste Management Bureau kept a large database and published a monthly journal of the latest advances; the Chemical Emergency Centre kept records of hazardous materials and gave round the clock advice to fire brigades and others faced with dangerous chemicals; and a disposal service dealt with small quantities of chemicals from labs.

As the Ministry of Technology did not have a laboratory of its own, it used the expertise at AERE Harwell, the Warren Spring laboratory at Stevenage and the Water Research Centre at Medmenham and the Building Research laboratory at Watford.

Senior people from the Ministry visited Harwell and over a number of brain storming sessions some of the original Waste Management Papers, known as the ‘red books‘, were written starting in 1976.

Feates had directed the HWS and later John Bromley took over, at which point the name was changed to the Environmental Safety Group. Landfill gas was being investigated by David Campbell and research projects investigated the behaviour of materials in landfill. Work was also being done on the behaviour of plumes from incinerator stacks.

We undertook projects both at home and overseas. David Wilson led a team to Hong Kong to assist in developing the landfill needed to build the new airport. We investigated large scale pollution in Romania on behalf of the UN and advice was given on chemicals on a sunken ship in Mogadishu, Somalia. Experience from this last project was useful when working on the sunken ferry, the Herald of Free Enterprise, just outside Zeebrugge in Belgium. Many other projects were undertaken. Asbestos, mercury and beryllium were removed from buildings, and hospital laboratories which had been affected by azides, microorganisms and perclorates were also decontaminated.

During the lifetime of the group several members left and took their expertise to other organisations. I retired in 1989 and the group ceased in 1996 with the demise of the AERE. I like to think the group began and remained at the forefront of environmental work for those 27 years.

From Trevor Letcher and Daniel Vallero

With regard to the review of Unraveling environmental disasters, we the authors disagree with the reviewer’s assertion that trichloroethane is not carcinogenic. Indeed, one of the two isomers of trichloroethane (1,1,2 trichloromethane) is widely recognised as a potential carcinogen.

It is possible that the reviewer is confused by the language – there is no human data, but the animal data supports the designation. In future writings, we will strive to differentiate and annotate examples of carcinogens, especially the means by which their carcinogenicity has been determined.

Certainly, the repetition of the Seveso text should have been avoided by cross-referencing. However, it remains an appropriate example in both instances.

The recent article ‘Scientific data disappearing at alarming rate’, reported that, ‘in materials science, essentially no primary data is published’. I have encountered this problem myself.

My PhD focuses on the corrosion of beryllium and I have found it particularly difficult to locate high quality reference spectra. Having now produced the data myself I have shared it in the database journal Surface Science Spectra. While it may not be of use to those outside the field, this journal is the only one I know of that seeks to address the problem of lost primary data.

I believe it would be of great use to the chemistry community if more journals of this type existed. 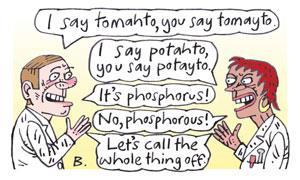 Where to find -ous

In response to John Boulton’s letter, I wish to stress that I’m well aware of the correct use of phosphorous as an adjective. The point of my previous letter is that misuse of the adjectival form as a noun is rampant.

Entering ‘phosphorous’ into a well-known internet search engine reveals numerous instances. Other examples can be found (cited from publications such as the New York Times, National Geographic, Scientific American and The Telegraph) in grammarist.com under the entry for ‘phosphorous–phosphorus’, which notes: ‘Phosphorous is so often used as a noun that examples of its use as an adjective are hard to find.’

On 10 December 2013, the chemical community lost an inspiring colleague and gifted scientist with the passing of Peter Ludwig Pauson at the age of 88. Through the mid-20th century he made seminal contributions to organometallic chemistry at the interface with organic synthesis.

Pauson was born on 30 July, 1925, in Bamberg, Germany. By 1938, his family’s Jewish heritage had driven them to flee to the UK, eventually settling in Glasgow. Pauson entered the University of Glasgow in 1942 to study chemistry, where he was inspired by Tommy Stevens, of the Stevens rearrangement and Bamford-Stevens reaction. Following graduation in 1946, Pauson took up a PhD research position with R D Haworth at the University of Sheffield.

After his doctorate, Pauson moved to Duquesne University, Pittsburgh, US. At this time the concept of non-benzenoid aromatics was still rather new and his research focused on tropolones and other potentially aromatic non-benzenoid systems. Attempting to form fulvalene from the dimerisation of cyclopentadienylmagnesium bromide, mediated by FeCl3, Pauson and his student, Tom Kealy, synthesised an orange-yellow solid with the formula C10H10Fe. In 1951 a note from Pauson was published in Nature describing its structure as two cyclopentadienyl rings each connected to iron by a single bond. Further studies by Geoffrey Wilkinson and Robert Woodward, and Ernst Fischer, established the now widely known sandwich structure of ferrocene.

Pauson was a leading contributor to many aspects of organometallic chemistry as the field emerged through the 1960s. In 1971, Pauson and his postdoctoral assistant, Ihsan Khand, discovered the reaction now known as the ‘Pauson–Khand reaction’. Pauson himself only ever referred to this reaction as the ‘Khand reaction’. Indeed, it was quite a frustration to Pauson that others amended the name of this, now world-renowned, transformation.

To his many colleagues, co-workers, and students, Pauson was a gentleman of modesty, humility, and compassion. Pauson will be greatly missed by them all and by his family, especially his daughter, Hilary, and son, Alfred. He was a fine man and a marvellous scientist. His humility and brilliance continue to serve as an example and those whom he knew celebrate a life of global scientific and personal impact.