Chemists may have finally got the blues, says Philip Ball

‘Ultramarine blue is a colour illustrious, beautiful, and most perfect, beyond all other colours’, wrote the Italian artist Cennino Cennini in the late 14th century. He and his contemporaries adored this mineral pigment for its rich, deep lustre. But they didn’t use it much, at least not unless they had a particularly wealthy client, because it was very costly. As the name implies, it came from ‘over the seas’ – all the way from what is now Afghanistan, where mines in the remote region of Badakhshan were the only known source of the parent mineral, lapis lazuli, for centuries. Not only was ultramarine expensive to import, but it was laborious to make: repeatedly grinding and washing the raw material to separate the blue colourant. Ultramarine could cost more than its weight in gold, and so painters reserved it for the most precious parts of their altarpieces, especially the robes of the Virgin Mary. 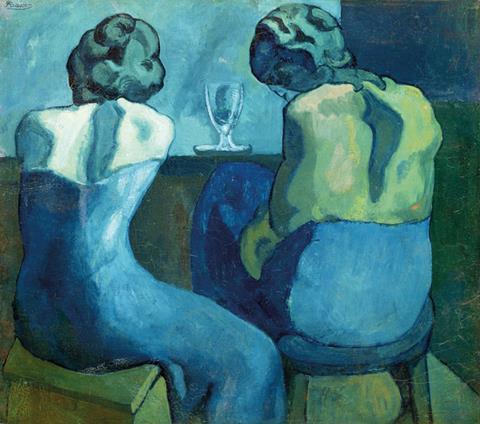 'Two women sitting at a bar', from Picasso's blue period

Blue has always been a problem for artists. One of the first synthetic pigments, Egyptian blue (calcium copper silicate), was pale. The best mineral alternative to ultramarine, called azurite (hydrous copper carbonate), was more readily accessible but is greenish rather than having ultramarine’s glorious purple-reddish tinge. Around 1704, a misconceived alchemical experiment yielded Prussian blue (iron hexacyanoferrate), which is blackish, prone to discolour and decomposes to hydrogen cyanide under mildly acidic conditions. The discovery of cobalt blue (cobalt aluminate) in 1802, followed by a synthetic route to ultramarine in 1826, seemed to solve these problems of hue, stability and cost, but even these ‘artificial’ blues have drawbacks: cobalt is rather toxic and ultramarine is sensitive to heat, light and acid.

So the identification of a new inorganic blue pigment in 2009 looked very promising. Mas Subramanian and coworkers at Oregon State University, US, found that manganese ions produce an intense blue colour, with the prized ‘reddish’ shade of ultramarine, when they occupy a trigonal bipyramidal site in metal oxides. The researchers substituted Mn3+ for some indium ions in yttrium indium oxide, forming a solid solution of YInO3 and YMnO3, which has a blue colour even though the two oxides themselves are white and black, respectively. The depth of the colour varies from pale blue to virtually black as the manganese content is increased. Inserting manganese into other metal oxides with the same coordination geometry also offers strong blues. Meanwhile, similar substitutions of iron(iii) and copper(ii) generate bright orange and green pigments. Those are traditionally less problematic, however, and while the materials may prove to have useful magnetic properties, it’s the blue that has attracted colour manufacturers.

But producing a commercially viable pigment is much more than a matter of finding a strongly coloured substance. It must be durable, for example. Although ultramarine is now made industrially from cheap ingredients in quantities that would have staggered Titian and Michelangelo, it fades in direct sunlight because the sodalite framework is degraded and the sulfur chromophores are released and decompose – a process only recently understood. This rules out many uses for exterior coatings. In contrast, the manganese compound has good thermal, chemical and photostability.

One of the key advantages of the new compound over traditional blues, however, is strong reflectivity in the near-infrared region. Many other pigments, including cobalt blue and carbon black, have strong absorption bands here. This means that surfaces coated with these pigments heat up when exposed to strong sunlight. Building roofs coloured with such materials become extremely hot and can increase the demand of air conditioning in hot climates; instrument panels and steering wheels of cars may become almost too hot to touch. That’s why there is a big demand for so-called ‘cool’ pigments, which retain their absorbance in the visible region but have low absorbance in the infrared.

This aspect in particular has motivated the Ohio-based pigment company Shepherd Color to start exploring the commercial potential of the new blue pigment. One significant obstacle is the price of the indium oxide starting material. It is produced (mostly in China) primarily for the manufacture of the transparent conductive material indium tin oxide to be used in electronic displays and other optoelectronic applications. Those uses demand that the material be made with extremely high purity (around 99.999%), which drives up the cost. In principle, low-purity In2O3 would suffice for making the new colourant, but there is no market demand for this so it is not currently made.

That’s why Subramanian and his colleagues are now trying to find a way of eliminating the indium from their manganese compounds – to find a cheaper host that can place the metal atoms in the same coordination environment. If they succeed, it’s possible we’ll see yet another revolution in the chemistry of the blues.