Tabletop chemistry games are a hit in and beyond the classroom

Humans have been playing board games for at least 5000 years. Now, teachers, academics and gamers are entwining the competition, strategy and fun of tabletop games with scientific knowledge, reaching new audiences who are learning chemistry while they play. 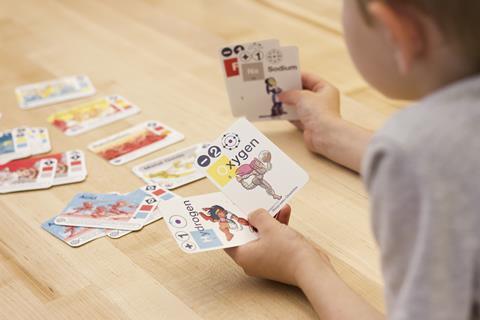 Card games for kids, like this one from Science Ninjas, introduce new audiences to the wonders of chemistry

Kelly Burleson is a teacher at Dalat International School in Penang, Malaysia. After several years spent adapting worksheet questions for use in existing games, she’s recently developed new tabletop games to engage her students with topics such as equilibrium.

‘We were studying Le Chatelier and the worksheet was so repetitive – “shift left, shift right, shift left, shift right” – and I was thinking oh my goodness … how can I get them to do all of these questions and not be terribly bored?’ Burleson’s solution was to develop a board game in which students must move counters between the ‘products’ and the ‘reactants’ side of the board as quickly as possible. The game also introduces other chemical concepts – for example, students must roll a score on their dice that corresponds to the required activation energy of a particular reaction to start the game.

Burleson has found the games to be effective for students of all abilities, but particularly for those who aren’t as motivated to study chemistry.

Michelle Joyce, a PhD student studying STEM Education at the University of Florida, shared similar experiences from her time in the high school classroom. Along with colleagues, she implemented a thematic based approach to chemistry for students who didn’t plan to continue to study science after school. One task involved students designing their own chemistry-themed games; for the final assessment, the students scored each others’ games by how educational and how much fun they were.

‘The reality is that not every student is not going to want to investigate science in further education,’ says Joyce. ‘The idea was that they were getting general a knowledge of science that is applicable in an environmental sense, in a home economics sense and in a ‘citizen science’ sense so that when they’re reading a newspaper article or hearing something on the news … they have a context for some of that language.’ 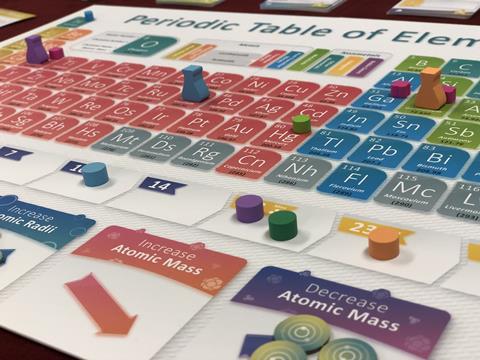 Chemistry + board game = lots of fun

Even students who do continue with science in further education can benefit from board games, as John Coveyou found when teaching chemistry part-time at a community college. ‘My students were already intimidated by a lot of concepts before they came into the classroom,’ he explains. ‘Even really basic stuff like the charge of certain particles … At the same time, friends of mine were playing games and memorising really useless information about sci-fi and fantasy worlds that didn’t really exist, and I thought, how can I get my students to engage with new material in the same way?’

In response, Coveyou started to develop games that could help his students feel confident about the fundamental principles of chemistry. The company he founded, Genius Games, has now published several scientifically accurate games that involve activities based on chemical concepts such as building atoms and exploring the periodic table.

Games can also engage younger children with chemistry. Rowan Clark originally created the card-based game ‘Elementals unleashed’ as a Christmas present for her brother and sister, but colleagues at the University of Edinburgh, UK, picked up on its potential as a tool for primary school outreach. The game introduces the elements as characters whose personality reflects their chemical properties. ‘I was chatting with one of my colleagues about how fluorine is like this reactive punk teenager and iodine is like this slow, kind grandpa, and the idea just snowballed from there,’ explains Clark.

Clark’s designs are very graphically appealing, something that’s important when reaching children, as cartoonist Nathan Schreiber from science game and graphic novel company Science Ninjas explains: ‘If it looks like oatmeal, the kids don’t want to eat it.’ To Schreiber, who co-developed the chemistry card game Valence with co-ninjas Amanda Simson and Naomi Klinghoffer, ‘a lot of educational products kind of look like educational products.’ To appeal to children, particularly those who are not already chemistry fans, ‘it’s important to have a nice level of gloss’.

Tabletop games also offer opportunities to explore bigger societal questions like climate change. Together with colleagues, Sam Illingworth, the co-director and founder of the Manchester game studies network, recently developed a global warming-based expansion kit for the popular board game Catan. He is set to launch a new game, ‘Carbon city zero’, in collaboration with the climate charity 10:10, in which each player takes on the role of a mayor; the winner is the first to make their city carbon neutral.

Illingworth, who is also a senior lecturer in science communication at Manchester Metropolitan University, UK, believes that the face-to-face interactions required by tabletop games can be more powerful than computer games for developing dialogue around specific scientific topics. On top of that, physical games have ‘a tactility – like rolling dice – that isn’t present in video games. [They] can be relatively easily modified, so you can get a commercially available, off the shelf tabletop game and play around with the rules using just a pen and paper … And [playing] creates this space in which people can interact physically with one another.’

In the UK alone, the games industry is worth almost £3 billion. By placing fun and science at the centre of their design and marketing, creative and engaging chemistry games could have the potential to monopolise a huge new audience.