Can chemistry get a podium place?

The Olympic site in London has a deep chemical heritage, and it should be built upon 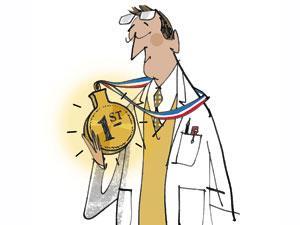 Given that the 2012 London Olympics will cost billions of pounds when the UK is burdened with enormous debts and rising unemployment, the vast investment must also provide more lasting benefits, both locally and for the country in general. It is clear that excellent facilities for world-class sporting events will remain but what about other benefits?

This main site of the London Olympics was, for centuries, a soggy marshland around the River Lea as it meandered to the Thames. But in the 1850s, budding young entrepreneurs crowded their chemical plants close together on one small dryish patch of land near Hackney Wick station, forcing them to coordinate and complement their neighbours. They inadvertently formed the world’s first cooperative science park, with major chemical plants like Atlas Dyeworks and the Carless Oil Company surrounded by smaller organisations that they spun off or absorbed. Such cooperation is a rarity on science parks today, although the idea is finding favour in high-finance pharmacological research.

This spontaneous chemical magic was the result, in part, of attempts to copy Germany’s success and help the country out of an economic depression. In 1845, Prince Albert saw the need to stimulate UK science and industry and he began by bringing his fellow countryman, August Wilhelm von Hofmann, to head up the new London College of Chemistry.

Hofmann soon demonstrated an ability to inspire young men and used to say to them that in his lab, magic was floating in the air. Indeed, within a decade, Hofmann’s youngsters had realised his objective of turning waste materials into socially useful substances, which in turn led to further industrial products. Thus it was that Prince Albert’s initiative had magically stirred UK industrialists into action. But there was a problem: public health legislation. It was that that drove noxious trades, like the chemical enterprises, eastwards out of the city to Stratford – downstream, downwind and almost unregulated – to where they flourished.

Recently, I have become involved in engaging children in the dramatic true science stories of their own neighbourhoods. In Hackney, young children acted and discussed plays of mine relating to their local Hofmann-linked Atlas Dyeworks. When the children asked what became of those works, I had to tell them that though the work was excellent, when a subsequent depression occurred, the firm’s financial directors chose to close the firm and sell off the business to the Germans. The children thought that silly because people like their parents would lose their jobs and I agreed. There was another reason this was foolish, however, because in spite of warnings by chemists, a few years later the UK authorities badly needed chemical companies during the first world war.

It is hard to ignore the close parallels between the UK’s current financial problems and those in the early twentieth century, but perhaps we can take inspiration from Prince Albert’s chemical education initiative that led new industries and employment on the same marsh where the London Olympic buildings now stand.

Strangely, although I have contacted the Olympic Legacy Authority and many other Olympic authorities, no one seems interested in the important scientific heritage of the Olympic site. The question then arises as to who is to benefit there when the Olympics are over?

Very few youngsters from the area will be able to compete in the glittering arenas that have been built over their local facilities, and, according to newspaper reports, local families are already suffering because of the rise in rents and other costs arising from Olympic ‘improvements’. But imagine what scientific, industrial or social problems might be solved by using the Olympics to promote the lost scientific legacy of the East End or re-establishing that cooperative science park where it used to be, beside the site of the 2012 Olympic games. Surely that would be a legacy to be proud of.