Can chemistry save the planet?

If we are to scale back our greenhouse gas emissions without society juddering to a halt, 21st century transport will need 21st century fuels. And of all the sciences, it is chemistry that is best placed to deliver them.

One promising fuel of the future is hydrogen. But the favourite method for making it in bulk at the moment - steam reforming of natural gas - produces huge amounts of carbon dioxide and leaves carbon monoxide impurities that poison catalysts. So what are the alternatives? 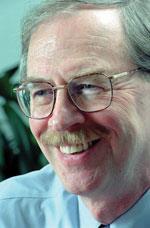 One way of producing hydrogen is by splitting water. And there are some reactions that will do this for you - the sequence below (see box) is one example. They occur at temperatures much lower than trying to do this just by heating water, though still at temperatures in the 800-1000oC range. If these reactions were driven by the heat from a nuclear reactor, it would potentially be a more efficient way to produce hydrogen than electrolysis.

A second route to hydrogen is synthesis gas - a mixture of carbon monoxide and hydrogen that is produced during steam methane reforming.

Syngas, as it is commonly known, has a chequered history. Germany used the gas as a fuel during World War II and it was important to South Africa during the oil embargo of the apartheid years. If it can be made without churning out CO2 it will again be important in our move to decarbonising fuels.

Making it by coal gasification and sequestering the CO2 produced is one way forward, and opens up possibilities for clean coal. Make syngas from biomass and you are in new territory. If that biomass is waste, then we will be doing what great chemists do best - taking something which is of low value and making it very much more valuable.

Now is also the time to bring to bear all our knowledge of separations, as chemists and chemical engineers, built up over the last 100 years, in the service of decarbonisation of the fuels and potential sequestration.

We need some clever chemistry to separate out CO2 from a mixture of gases - whether it is from the production of syngas, the flues of conventional power stations (see ’How to bury the problem’) or natural gas fields with high concentrations of CO2.

Developing new methods for liquid separations is also of crucial importance. This is the obstacle that we need to be looking at today if we are to be able to make use of the work being done to produce the next generation of biofuels. We need to be able to strip away the butanol, or hydrocarbons, or other more exotic molecules being produced before they kill the bugs, and we need to be able to do this on a large scale.

This is not all of it. Not by a long shot. How could we reduce the quantity of platinum in a fuel cell by a factor of 10? Can we develop the chemistry of lactic and succinic acid, good products from biomass, to make the full suite of chemicals we will want to make biologically rather than petrochemically? Can we be chemically cleverer about energy storage, on board vehicles and from stationary renewables? What are the novel materials that we can develop to safely store gases, especially hydrogen, at very high pressures?

More than ever, as we face up to the energy challenges of the 21st century, chemistry looks like the central science.

Bernard J Bulkin is a venture partner with Vantage Point, and a professorial fellow of New Hall, University of Cambridge, UK.