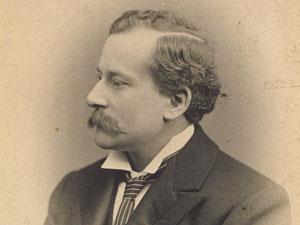 Fear is the primal emotion that touches and, in some cases, defines everyone. Teenagers have no sense of mortality, and therefore seem preternaturally fearless; as people grow older, they seldom stray out of their comfort zone. Those who do live dangerously are looked on with a mix of respect and incomprehension. For the researcher, experiments can be a way of stepping into the unknown and letting go of textbook certainties. Couple that with chemical instability and the line between success and disaster becomes razor thin.

Frederick Chattaway was born in Warwickshire in 1860. His father had a ribbon-making business in Coventry, but the family was cast into penury by the Cobden–Chevalier free trade treaty of 1860 that lowered import tariffs, bringing French and Swiss competition. Forced to improvise, his mother opened a small private school in Birmingham. Perhaps it was she who gave him a love of poetry that would stay with him throughout his life.

Academically gifted, he studied first at Mason College in Birmingham. But his reliance on scholarships led to an itinerant education. He moved to the Royal School of Mines in London, then to Glasgow to study medicine. He didn’t like dissection, so continued to Aberystwyth and finally to Oxford, where he studied with the influential physical chemist Vernon Harcourt. By 1891 he had first class degrees from both London and Oxford, so he headed to Germany to isolate aromatic hydrocarbons from coal tar, characterising picene, chrysene, and a variety of biphenyls and binaphthyls.

Back in England in 1893, where he became a demonstrator in the medical school at St Bartholomew’s Hospital in London, Chattaway began to investigate the chemistry of ‘iodonitrogen’ or nitrogen triiodide. With Kennedy Orton, he explored all aspects of this very dangerous material, establishing its stoichiometry. He made and distilled nitrogen trichloride, believing it to be safe in clean enough glassware, and moved steadily towards organic chemistry, studying the rearrangements of chloroacetanilides and preparing sulfonamides of nitrogen chlorides. It never occurred to him that his compounds might have any use, but two compounds he made, chloramine-T and dichloramine-T are still used as disinfectants and mild bleaching agents.

After Chattaway made eight short reports on the work at a meeting of the Chemical Society of London in 1899, the society’s former president Henry Armstrong railed grumpily at what he saw as unnecessary fragmentation of results.

Perhaps piqued by British stuffiness, Chattaway published his research in the American Chemical Journal in 1900, in a series of five long papers stuffed with fascinating detail. In one case he washed a kilogram quantity of pure nitrogen triiodide with water continuously for several weeks, and found that it slowly decomposed to iodine. That he managed to work with such enormous quantities of a compound with such an unsavoury reputation is an indication of his supreme laboratory skills and his fearlessness as an experimenter.

He was, by all accounts, an inspirational mentor: tireless at the bench and always ready to find ways to get round chemical difficulties. He was also ferocious with messy students. But his love of bench chemistry made him notorious for getting carried away in the lab and forgetting meetings and lectures.

The spatula that bears his name in equipment catalogues bears the hallmarks of the practical chemist. In Chattaway’s day spatulas were either flat, flexible blades of steel or horn – often with a wooden handle – or spoons of metal or porcelain. The Chattaway-pattern spatula was made of nickel – convenient for its inertness – or steel, with two flat blades, one square and one rounded. But the bend just before the rounded end is the perfect adaptation to lift small quantities of powder out of a flask or bottle, and to scrape the solid adhering to the sides. It would have served Chattaway in good stead as he beavered away at the bench. But hard as I’ve tried, I have no direct evidence that he ever actually used it.

In 1905, Chattaway resigned from St Bartholomew’s and travelled to Germany where he enrolled as an ordinary student in Heidelberg. He worked with physical chemist Georg Bredig, and then with Ernst Cohen in Utrecht, the Netherlands. He then secured a position back at Oxford. His work on halogenated organic compounds continued, but he also reported a simple preparation of tetranitromethane and a method for preparing some of the best copper mirrors I have ever seen. But for all of his involvement in innovative chemistry, he had little interest in theory. He largely ignored the steady rise of mechanistic organic chemistry promoted by chemists like Robert Robinson, Arthur Lapworth, Christopher Ingold, and his old friend Orton.

Chattaway was a careful and painstaking explorer of the chemical world. He studied some of the most dangerous compounds known, and was prepared to drop academic security for something more interesting. If two words can summarise his career, they are:
No fear.

Thanks Peter Morris for helpful insights