Many years ago, a friend of mine teased me about how I, as a chemist, would probably die young of some dread occupational disease 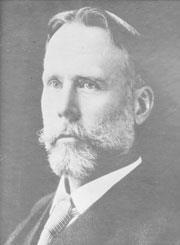 Many years ago, a friend of mine teased me about how I, as a chemist, would probably die young of some dread occupational disease. Peevishly, I replied that he, a geologist, might die romantically when a rock fell on his head; or, more prosaically, wrapping his beloved pickup round an exotic rock formation.

Even if the actuarial statistics do not bear out my friend’s hunch, there is no doubt that chemists are perceived as living dangerously. We heat things. We evacuate them. And we work with things that aren’t very good for us. Cyanide and chloral hydrate were once part of undergraduate practicals, mercury flowed in rivulets, flames were everywhere. And because of its remarkable inertness, so was asbestos - a cheap wonder-material central to, amongst other things, gravimetric analysis thanks to the work of Frank Austin Gooch.

Born in Watertown, Massachusetts, US, in 1852, his father was a lumber merchant who nurtured his son’s interests in science - helping him make electrical machines and Leyden jars to store static charge. The young Gooch found his classical schooling rather dull, so with glassware and chemicals obtained from his uncle, he started doing home experiments. These grew in scale and ambition, peaking with a cataclysmic display in the kitchen. Years later he would recall sardonically that his aunt Lucy’s ’arrival upon the scene of devastation prevented repetition of my first chemical experimentation - more successful so far as the anticipated results were concerned than many since made’.

He went to Harvard University, US, at age 16, specialising in chemistry and physics. After graduating, he became an assistant to Josiah Cooke - a brilliant undergraduate lecturer with whom he started research. Wanting to develop his interest in crystals, Gooch spent time in Vienna, Austria with the mineralogist Gustav Tschermak. He returned to Harvard to finish his PhD and then went back to Europe for an extensive tour of universities.

A prestigious fellowship took him back to Harvard, working with Wolcott Gibbs, who steered him towards analytical chemistry. It was then that he became frustrated with existing methods of gravimetric determination. Suction filtration on paper was limited by moisture retention in the paper if heated to temperatures below 100?C, or charring above. Gooch’s former boss, Josiah Cooke, had developed ’inverse filtration’, which allowed one to suck up the supernatant liquid from above a precipitate; Charles Edward Munroe, also at Harvard, had devised conical porous clay filters that were very effective and could be fired in an oven, but were slow to dry, and tended to reabsorb moisture from the air quickly; and a number of chemists, including the great Robert Bunsen, had attempted to make thermally and chemically robust filters from asbestos.

Gooch brought several of these ideas together. He took a platinum crucible and riddled its flat base with holes. A slurry of acid-washed asbestos fibres could then be poured into the crucible under suction to produce a ’felt’ filter bed. After drying to constant weight, the crucible was ready. Precipitates could be filtered directly, even from highly corrosive mother liquors, and then fired in situ. The technique required little skill and few fancy materials - highly inert platinum crucibles (exotic by today’s standards) were once fundamental kit for chemists.

In his reminiscences, Gooch was characteristically modest about his creation, writing that his device ’proved to be of such general utility in analysis that, dubbed by the craft with my surname, it has found its way into the "Standard Dictionary", dragging me along with it.’

After adventurous stints as an analyst at the US Geological Survey and chief chemist for Yellowstone National Park, in 1886 he became professor of chemistry at Yale University, US. He rebuilt the antiquated teaching programme and taught all branches of chemistry for undergraduates himself. He was an inspiring lecturer, aiming his material at the best students, and peppering his classes with demonstrations. His reputation led to a steady expansion in student numbers, particularly to non-chemistry majors. He oversaw the construction of the Kent laboratory and its subsequent extensions.

Postgraduate numbers also rose and Gooch supervised numerous research students, working at Yale until his retirement in 1918, after which he devoted himself mainly to family genealogy. He died in 1929 at the ripe old age of 78.

Contrary to popular belief, many of the nasties in our labs have gone. Labs are ventilated, cyanide is locked away, and asbestos - strongly associated with the aggressive form of lung cancer, mesothelioma - has vanished completely. But Gooch’s crucibles, reinvented in Pyrex with sintered glass frits, endure. As such, most of us chemists - like Gooch before us - are likely to die in our beds. Or perhaps just commuting to work.