One man who took little on trust was Wilhelm Ostwald. Born in Riga, Latvia, he studied chemistry at the University of Dorpat (now Tartu, Estonia). 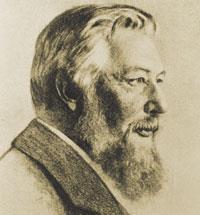 Baltic German chemist, 1853-1932. A meticulous experimentalist, father of modern physical chemistry and developer of a simple apparatus to measure the viscosity of liquids.

St Thomas is one of the more memorable of the Christian saints. He is remembered as an impetuous man prepared to take great risks in spreading the good news, at a time when Christians were increasingly attracting the unwanted attentions of the both the Jewish establishment and the colonial Roman authorities. When the end came, and Jesus was crucified, the apostles went to ground. After the execution, the others informed Thomas that Jesus was still around. Thomas was unconvinced and demanded proof. A few days later, Jesus appeared again, and challenged Thomas to place his fingers in the wounds inflicted by his Roman tormentors. Thomas relented. He was, in short, a scientist.

I sometimes wonder how much of the dogma we read in our undergraduate textbooks we have actually seen direct evidence for? One man who took little on trust was Wilhelm Ostwald. Born in Riga, Latvia, he studied chemistry at the University of Dorpat (now Tartu, Estonia) and, after getting his doctorate, rapidly moved up the ranks to become professor of physical chemistry at the Riga Polytechnic in 1881.

As a graduate student, Ostwald had started to look at equilibria by studying competition between pairs of acids and bases. Traditional analysismethods - titration or precipitation - would have disturbed these systems, so Ostwald adopted physical measurements, particularly volume of reaction and refractive index, as proxies. 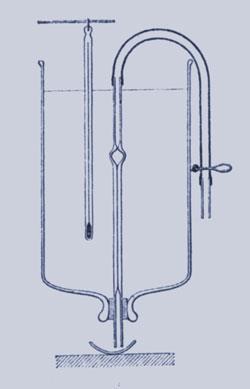 In 1884, Ostwald was sent the doctoral thesis of a young Swede, Svante Arrhenius, which described the conductivities of acids, bases and salts. In his thesis, Arrhenius argued that these compounds dissociated into charged species - ions. Ostwald was electrified by the suggestion and concluded that acids must all share a common ion. Differences in acid strength must therefore arise from differences in the extent of dissociation - this led to his famous dilution law, which he tested, with typical thoroughness, on about 200 compounds.

So began a life-long friendship. During a visit to Riga in 1886, Arrhenius tried to get to grips with the effect of dissolved substances on water by measuring the viscosities of aqueous solutions using a simple device of Ostwald’s invention - a capillary with a pair of marks, surmounted by a bulb. Sucking the solution up, one could record the time required for the meniscus of a precise volume of solution to flow between the two marks, which relates to the viscosity. Arrhenius made hundreds of measurements and the device is still widely used. 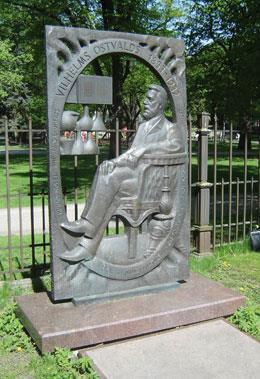 Ostwald - relaxing in bronze in Riga

Ostwald’s fame grew and he became professor at Leipzig, Germany. He defined the idea of catalysis, coined the word mole, and contributed to thermodynamics, electrochemistry, and colloids. Following the invention of the Haber-Bosch process for ammonia, he patented its catalytic oxidation to nitric acid. And together with van’t Hoff and Arrhenius he founded the journal with which the three would revolutionise chemistry, the Zeitschrift f?r Physikalische Chemie.

But Ostwald did not believe in atoms, and he was not alone. At the start of the 20th century there were plenty of mainstream scientists who thought little of the idea. Even after Dalton and, more importantly, Boltzmann’s mind-boggling statistical theory of the invisible, which was consistent with every chemical and thermodynamic measurement, there were many that would not buy in. In his Faraday lecture of 1904, Ostwald argued ferociously that atoms were a convenient construct - a nice model - but one that bore no relation to the underlying reality, which was energy. It was only when Jean Perrin published data that fitted Einstein’s 1905 treatment of Brownian motion, that Ostwald was at last forced to capitulate. When he retired in 1906, he was the grand old man of physical chemistry, and spent the rest of his life writing about philosophy and arguing against the church’s views on science.

I had always imagined that Thomas must be the patron saint of scientists, the one saint who had actually demanded evidence to support his belief. Not a bit of it. That honour goes to Albert the Great - Albertus Magnus - a theologian, writer, and alchemist who, with his student, Thomas Aquinas, established Aristotle’s untested hypotheses as the cornerstone of Catholic theology, with the result that dogma still triumphs over scientific evidence. Should we perhaps start a campaign in Thomas’s favour? If we did, we should probably not hold our breaths. Just look at how long it took to change thechurch’s view of Galileo.