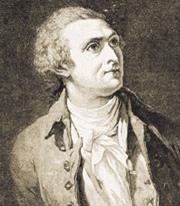 Source: © WOOD ENGRAVING BY EDWARD WHYMPER, AFTER A PAINTING BY ST OURS

In 1959, jazz trumpeter Miles Davis assembled his ideal sextet. Using simple musical scales, instead of the complex harmonic progressions of their contemporaries, they attempted, in five mesmeric and introspective tracks, to redefine an art form and capture the essence of all that was blue. For it is a colour of mystery - have we not all asked ’why is the sky blue?’

To science, the sky was a puzzle and a challenge, not least for Horace-B?n?dict de Saussure. Born into a wealthy family near Geneva, Switzerland, he ascribed his wide-ranging curiosity and stamina to his mother, Ren?e de la Rive. Her brother in law, the naturalist Charles Bonnet, plied the boy with books, and guided his botanical interests. Growing up, Saussure roamed widely in the Jura mountains, reaching summits, making observations, and collecting specimens. But his gaze was drawn to the great snow-capped mountains to the south. Most of all, he was hooked by the silhouette of Mont Blanc, the highest peak in western Europe.

In 1760, he hiked up the Chamonix valley in France, taking extensive notes and sketches, and climbed the Br?vent, a peak facing the great mountain. Transfixed by the awe-inspiring grandeur of the scene, he swore to be the first to reach the summit.

His collections and observations rapidly bore fruit and his academic career was meteoric. At the age of 22 he was appointed professor of natural philosophy at the University of Geneva. Excited as he was by his appointment, he winced at the prospect of having to teach students little younger than himself. Yet his brilliant lectures in mathematics, physics, geology, natural history - even philosophy - and his experiments, won him their admiration. 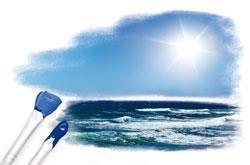 How blue is that sky?

He measured all he could, and when he couldn’t measure it, he designed new instruments to do so. He invented a fast and sensitive horsehair hygrometer, a magnetometer, and an anemometer. He was among the first to establish the atmospheric lapse rate - the temperature drop as a function of altitude. To investigate the mechanism of the heating of the atmosphere by the sun, he developed a heliothermometer - a thermometer in a blackened box with which he could measure the intensity of the sun’s rays by comparison with another hung in the open.

Armed with his tools and a small chemistry set, he trekked round the valleys and beyond. As his trips carried him ever higher, he puzzled about the colour of the sky. Local legend had it that if one climbed high enough it turned black and one would see, or even fall into, the void - such terrors kept ordinary men away from the peaks. But to Saussure, the blue colour was an optical effect. And because on some days the blue of the sky faded imperceptibly into the white of the clouds, Saussure concluded that the colour must indicate its moisture content.

But how to measure ’blueness’? Using suspensions of Prussian blue, Saussure dyed paper squares every shade of blue he could distinguish between white and black. These were assembled into a numbered colour circle that could be held up to the zenith at a standard distance from the eye - the matching square established the degree of blue. 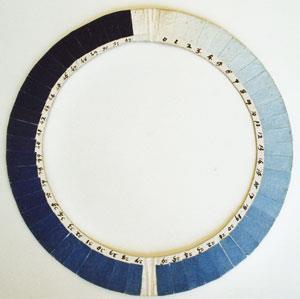 In 1786 two Chamonix guides, Jacques Balmat and Michel-Gabriel Paccard, announced that they had climbed Mont Blanc. If he was disappointed at missing out, Saussure let it pass. He hired them the next summer for a scientific expedition to the top. With a servant and 18 guides to lug his equipment, he set out, reaching the summit in 3 days. It was a thrilling moment - breathlessly, he measured everything he could, including the colour of the sky - the deepest he’d ever seen at 39 degrees blue. After 3 hours they headed down, his obsession with Mont Blanc fading. He would return the next summer for a week of measurements on the nearby Col du G?ant, while his son and a friend did the same in the valley below and in Geneva. It was the dawn of coordinated, quantitative meteorology.

The cyanometer now seems a quaint piece of apparatus - even a dead end. But was it really so different from our litmus, lead acetate, and starch iodide papers? Or the nanochemical colour tests that now fill our journals? The enigma of the blue sky would not be solved until John Tyndall’s hunches (gleaned in the Alps) led Lord Rayleigh and then Gustav Mie to the mathematics of light scattering. But Saussure’s quantitative scale was nonetheless an object lesson in scientific rigour. Like Miles, Saussure was exploring a world that is, in so many ways, ’Kind of Blue’.

I am grateful to Laurence-Isaline Stahl Gretsch, Museum of the history of science, Geneva.