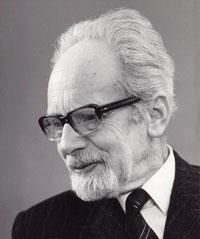 James Watson’s Double helix  is, without doubt, one of the greatest descriptions of scientific discovery in print. I still remember, as a rather nerdy teenager, sharing Watson’s breathless excitement as he recounted the events leading to his and Crick’s incredible breakthrough. It was one of the few science books which could compare with such 20th century tales of derring-do as Knut Haukelid’s Skis against the atom  (the story of Norwegian patriots crossing the mountains to blow up the hydroelectric deuterium enrichment plants so coveted by the Germans) and Fitzroy McLean’s Eastern approaches  (a tale of a young diplomat giving his Stalinist minders the slip to explore Central Asia). The only difference was that Crick and Watson didn’t have guns.

Buried in the pages was a name that would come back into my life some 15 years later, when I was a graduate student doing organometallic chemistry. The name was Rudolf Signer, a polymer chemist, whose elegant apparatus I have used many times over the years.

Ever since Thomas Graham had first started investigating osmotic pressure, there had been a lot of speculation about how the phenomenon worked. It was Francois-Marie Raoult who first unravelled the effect of differing solute concentrations on properties such as vapour pressure, osmotic pressure and boiling and freezing points. Variation in these properties could be used to calculate molecular weights in solution, explaining some of the speciation that molecules got up to. Ernst Beckmann’s invention (Chemistry World  , December 2007, p73) of an extremely sensitive differential thermometer allowed measurement of tiny temperature differences. But such methods were time consuming, needed a lot of solvent and did not allow speciation to be studied as a function of temperature.

’The Dog’: a chemist’s faithful friend

In 1904 the organic chemist George Barger invented isothermal distillation. The idea was simple. You take a capillary and put into it a small drop of a solution of your unknown compound. Two drops of a standard solution of a known material are placed on either side of it. The capillary was then sealed and the solutions left to equilibrate. Over a period of a few days the vapour pressures would come to equilibrium, leading to changes in length in the drops (measured with a microscope), and related to the molecular weight of the unknown. It was elegant, but fiddly. It was also very difficult to apply to viscous solutions and the risk of cross-contamination was ever-present.

Aware of Barger’s method, Signer’s version consisted of two interconnected bulbs, each sporting a graduated tube. The unknown solution, and a standard, could each be placed in a bulb without risk of cross-contamination. The device was evacuated, sealed off, and left to equilibrate. The device was then rotated gently, causing the solutions to flow into the pipettes. If equal masses of material were used, then the heights were inversely proportional to the molar mass. The method caught on slowly but steadily, particularly among organometallic chemists who needed a very gentle method that was easy to combine with Schlenk techniques. When I first met one, the Signer sported two yellow stopcocks, and was referred to affectionately as ’The Dog’.

Signer’s interests moved into the biological realm, and he began to investigate nucleic acids whose function was, in the late 1920s, a mystery. Signer’s group focused on DNA extraction and developed methods that yielded the best samples of their day. In May 1950, Signer turned up at a Faraday Symposium in London with a vial containing 15 grams of DNA. After his talk he gave away samples to several research groups, including to Maurice Wilkins from King’s College, London, who was astonished by it: ’Every time I touched the DNA gel with a glass rod, I was able to pull out a thin and long fibre like spider’s thread.’ The material diffracted stunningly and Ray Gosling and Rosalind Franklin took their crucial X-ray photographs. The rest, as they say, is history.

I still use ’The Dog’ and lend it to colleagues from time to time. And when I rotate it round, I imagine that I have a faint connection to the man whose gift made the discovery of the double helix possible.