Ours is the age of the performance indicator. In every sphere of our lives, more data are being collected, compiled, and analysed than ever before. From these, league tables of schools, hospitals, beaches, and picnic sites can be generated. And while we know, deep down, that the theoretical underpinnings of these rankings are seldom far from that tabloid favourite - the ’equation’ that predicts The Happiest Day of the Year - we are still seduced. The impact factors of academic journals are calculated to four or even five significant figures, in spite of a plethora of papers (in the very same journals) demonstrating their unreliability. University league tables, at all levels, mostly confirm that comparisons are invidious. And in all this, Goodhart’s law - that numerical indicators used as instruments of public policy cease to be reliably indicative - is invariably forgotten. 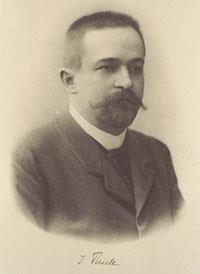 In chemistry, too, some indicators rule the roost, even when their precise origin is hard to explain. Pre-eminent amongst these is the melting point - a number that, until quite recently, was reported for every single compound in the scientific literature.

The first analytical melting point - that of benzamide - was reported by Justus Liebig and Friederich W?hler in 1832, alongside data in support of their proposed structure. Since composition was of no help in the differentiation of isomers, melting points became quick and easy diagnostic data at a time when there was little else to go on.

One of those who codified a key method for their determination was the organic chemist Johannes Thiele. He was born in Ratibor, in East Prussia (now in Poland) in 1865, the son of a bookseller. His family encouraged his scientific interests and his favourite toys were flasks and retorts, with which he would carry out experiments. He began a mathematics degree at Breslau but moved to Halle, where Jacob Volhard was professor, when his father’s business collapsed. Volhard was not long in spotting Thiele’s talents, and after writing a dissertation on methods for the determination of antimony and arsenic, Thiele moved into organic chemistry, studying nitro and amino guanidines and earning his Habilitation. 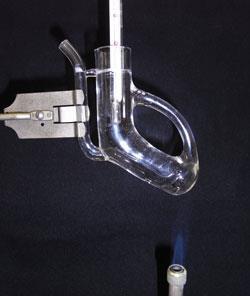 A modern Thiele tube - with an extra bubbler to maximise mixing

In 1893, at the age of 28, he was invited to join the academic staff in Munich, where Adolf Baeyer was building one of the great schools of chemistry. Thiele continued his work on nitrogen compounds but then began to study unsaturated systems, developing the synthesis of fulvenes from cyclopentadienes and ketones. He was puzzled by how the double bonds shifted around when butadienes, for example, underwent addition reactions. This led to his theory of residual valence and his refinement of the Lohschmidt-Kekul? structure of benzene; he was the first to represent the bonds by a series of dots inside the hexagon, thereby implicitly accepting delocalisation.

All this required a lot of synthesis and therefore measuring of melting points to confirm the identity and purity of each intermediate. Melting points were determined using a capillary, strapped to a thermometer, placed in a round bottomed flask. This was filled with concentrated sulfuric acid, the only common liquid that had a high enough boiling point and, unlike paraffin oil, would not darken with time. But keeping the temperature uniform was tricky and required the flask to be constantly stirred. This had to be done with an additional stirring rod, since every chemist is taught that stirring with thermometers is taboo. 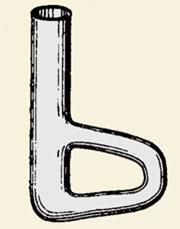 In 1907 Thiele described a device he had been using for a couple of years - a glass tube bent into a loop like a bow. After filling with acid, the thermometer and capillary were placed in the open section, while the tube was gently heated on the bow with a flame. Convection ensured steady mixing of the liquid and the small volume guaranteed that the device could be cooled back to room temperature in minutes for the next determination.

By then Thiele had moved on to a professorship at Strasbourg, succeeding Rudolf Fittig. He would stay there, working on gas masks during the first world war, until his early death at the age of 53.

Electrical heating blocks have replaced sulfuric acid and Bunsen burners. But melting points remain the fastest and cheapest way of checking the purity of our compounds - a performance indicator indeed.