Transport systems can be great unifiers and bringers of development 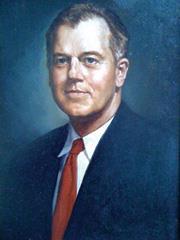 Transport systems can be great unifiers and bringers of development. In Africa and America, railways opened up the interior of continents. In England, the Great Western Railway tied London so strongly to the West Country that parliament had to impose a uniform system of timekeeping, independent of the motion of the sun. But roads and railways are also metaphors for boundaries and difference: ’Which side of the tracks are you from?’ When we group ourselves into tidy categories - chemists, physicists, engineers - the boundaries can seem hard to bridge. One man who made the crossing was an engineer who probed deep into the structure of matter, while raising puzzling chemical questions.

Robert Van de Graaff was born in Alabama, US, and studied mechanical engineering, where he developed an interest in energy conversion and electrical power generation. He spent a year at the Sorbonne in Paris, France, attending Marie Curie’s lectures on radioactivity, then moved to the University of Oxford, UK, for a doctorate as a Rhodes scholar. While there he read Rutherford’s plea for ’a copious supply of atoms and electrons transcending in energy the alpha- and  beta-particles produced by radioactivity’. On taking up a National Research Fellowship at Princeton University, US, in 1929, Van de Graaff began to explore the idea of accelerating particles to ever greater energies using electrostatic fields - as he put it ’to meet the atom on its own terms’.

But how to create such fields? Direct current transformers had plateaued at 700kV, so Van de Graaff began to wonder whether the workhorse of electrostatics, the Wimshurst machine, might not hold the clue. Its spinning wheels separated triboelectricity - charge produced by rubbing together dissimilar materials. Van de Graaff dreamed up a device in which a loop of silk ribbon acted as a conveyor belt for electrical charge, injected at one end and deposited at the other. He visited a series of haberdashers’ shops, where he terrorised the staff by setting light to strips of silk, to check that it had not been treated with conducting tin salts. Returning to the lab, he formed the ribbon into a belt and spun it with a small electric motor, using a metal can as a reservoir. The secret was the collection of the charge by points on the inside of the can; the charge then moved spontaneously to the more stable exterior. 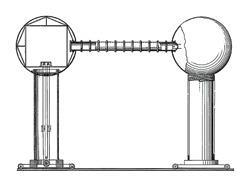 Van de Graaff was rewarded by the corona discharge from the rough edges of the metal - in seconds he had reached 80kV. In later prototypes the collector became a smooth metal sphere mounted on an insulating stalk, and the belt was a much more substantial affair that doubled back to convey even more charge. Pairing two of these towers, he could develop potential differences of over a megavolt. By 1935, with a patent under his belt, Van de Graaff thrilled the audience at the dinner of the American Institute of Physics with a spectacular demonstration of his invention.

Despite Van de Graaff’s best intentions, this is perhaps the most memorable use of his generator

But the intriguing thing about Van de Graaff’s patent is the wording. Nowhere does he mention the origin of the charge on the device. While the brushes that delivered the charge at the base of the belt were connected to a 5kV power supply, the patent speaks only of the belts transporting positive and negative charges - there is no mention of the electron. This will come as a surprise to anyone who is trained in classical electrostatics, where all phenomena are assumed to be ruled by electron transfer. But is this actually true? The mechanism of tribocharging remains an open question. It pits the electronists, led by Allen Bard at the University of Texas in Austin, US, against the ionists, headed by George Whitesides at Harvard University in Boston, US. The ionists argue that contact of one material with another disturbs the ubiquitous layer of moisture on the surfaces, with protons and hydroxyls being separated, a process with a much lower enthalpy than removing electrons (the work function). The debate restores chemists to the centre of the electrostatic world.

But for Van de Graaff, it was simply about potential, and he was now able to use his machines to fulfil Rutherford’s dream, carrying out experiments on electron beams at energies far higher than any  beta-particle. He would spend the rest of his career teaching and developing ever more sophisticated methods of generating the high voltages needed for particle physics. He died, suddenly, aged only 65.

Particle physics has now moved on to energy regions that seem to transcend science and embrace the mystical. But those early conveyor belts, and their iconic towers, force us to ask surprisingly difficult chemical questions. Which side of the tracks do you live on? With the electrons? Or the ions?