Lightning is one of the great metaphors for the creative process

Lightning is one of the great metaphors for the creative process - the genius suddenly struck by a brilliant flash - the spark that changes everything. Central to its appeal is the idea that lightning strikes out of the blue. But the reality is almost never quite so poetic. 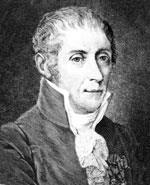 Alessandro Volta was born in the picturesque town of Como, in Italy. His failure to speak by the age of four led his parents, members of the local nobility, to conclude that he was a halfwit. When his father died three years later, however, his uncle sent him to be trained by the Jesuits. He studied rhetoric and philosophy, developing a love of poetry. One of his teachers, Girolamo Bonesi, tried to convince him to enter the church, while his uncle favoured law. But Volta - whose interests in philosophy continued to strengthen - refused. He read widely, not least Denis Diderot’s revolutionary encyclopaedia, and then began to experiment with electricity - the subject that would become his obsession.

He left school at 17, and the following year built the first lightning rod in Italy. He began to correspond with Milan’s leading philosopher-scientist Cesare Beccaria and with Jean-Antoine Nollet in Paris, France - a leading authority on electricity. Volta would soon write his first scientific paper, in Latin verse, De vi attractiva ignis electrici ac phaenomenis inde pendentibus  (On the attractive force of electric fire and related phenomena). The paper produced quite a stir and led to his appointment as teacher of experimental physics at the local secondary school.

The appointment gave him time to play with electricity. Always an experimentalist, in 1774 he invented what he called his ’perpetual electrophorus’ - a device that allowed him to accumulate a static electric charge by rubbing an insulated metal plate against an amber or wooden disk. In this way he could transfer enough charge from one place to another to carry out further experiments on electrostatics and electrical conductivity.

A statue of Volta (with pile) in Como

Volta’s reputation soon outstripped his position, and in 1778 he took the chair of experimental physics at the University of Pavia. In 1791 Luigi Galvani, a medic at the University of Bologna sent Volta his report of how newly-dissected frogs’ legs would twitch during thunderstorms and electrical experiments, especially when in contact with metals. Galvani believed he had found the ’animal electric fluid’, which he equated with the vital force.

Volta was unconvinced. Having observed, using his electrophorus, that he could charge metals differently by rubbing them together, he showed how frog’s legs twitched on contact with two dissimilar metals. For Volta, the frog leg was just a conductor. Galvani and Volta sparred, cordially but forcefully, carrying out ever more experiments to back up their views.

By 1800 Volta was sure that the animal component was a red herring. He began to stack metallic discs one above the other - zinc and silver proved the best - as high as he dared, separating each from the other by a piece of damp cloth, paper, or leather. The result was that he had a source of electric charge, not as great as the static charge stored in a Leyden jar, but ’perpetual’ - the first source of direct current.

Finding that moist contacts were best, he tested these currents not on frogs but himself. Connecting his tongue and his eyeball, his face twitched and he saw flashes of light. Using probes in his ears he got powerful shocks, but also heard mysterious noises. The jolts were proportional to the nature and number of discs in the stack - thus the ’tension’ (what we now call the voltage) was additive. And the current made wires glow. Volta sent his results to Joseph Banks of the Royal Society in London, who published them immediately.

The reaction to the paper was electric. Within months William Nicholson and Anthony Carlisle in England found they could split water into hydrogen and oxygen, coining the word electrolysis. Humphry Davy, most famously, used stacks of several hundred disks to isolate the alkali metals. Volta was awarded the Royal Society’s Copley Medal, and invited to Paris by Napoleon and ennobled. He would end his career in Padua, and eventually retire to Como. As he wrote to a friend, he liked domestic life best. 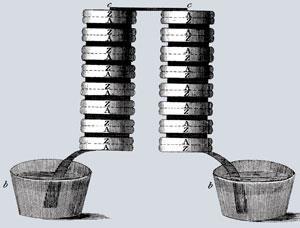 Through Faraday, Oersted, Ohm, Amp?re, Tesla, and countless others, direct current would change the world. Lightning only ever strikes once. So was Volta’s lucky strike not a case of perpetual lightning?