What is medicinal chemistry going to be like in another 20 years? Recent trends make this a more nerve-wracking question than it would normally be, but that’s all the more reason to think about it. The first thing many of today’s med-chemists must wonder is how many of them will still be around. The relentless barrage of layoffs around the industry, if it continues at the current pace, will see all of us off well before then.

But as Herbert Stein said about economics, if something can’t go on, then it won’t. And any process that leads to zero medicinal chemists can’t go on, because there’s no way (for the foreseeable future) to dispense with us. I’m going to assume that people will continue to get sick, that they’ll continue to want new medicines - and that a large proportion of these will continue to be small molecules. If so, someone has to discover and produce them, and no one else save the chemists seems very enthusiastic about doing that.

The only one of those assumptions that’s seriously open to challenge is the one about the proportion of small molecules. Biological drugs are definitely on the upswing, and if technologies such as RNA interference live up to their billing, they’ll be serious contenders. But 20 years will be barely enough time to find out if that’s going to happen at all - there are surely a number of surprises (both good and bad) waiting for us in those areas, and working them out will take time.

But there’s one other assumption that I left out: that people will want these medicines enough to be willing to pay for them. And this is one of the biggest factors that’s been remaking the industry recently: it costs too much to discover and develop drugs. Coupled with what looks like a declining success rate of drug discovery in general, and you have the two sides of the vice that’s been squeezing the whole field tighter every year. And I think the next 20 years will be spent trying to escape from that vice, one way or another.

But the escape through cost-cutting can only be taken so far. We’re already seeing attempts to send every possible position to the lowest-cost sites available, mainly China and India. But neither of those countries is as cheap as it used to be, and that trend will continue, making outsourcing only a partial (and somewhat temporary) solution. One possibility is for other countries to come up as the new low-cost research destinations, although it’s hard to picture who those might be. At any rate, researchers in less-traveled regions may well look at the rising costs of doing business in China and sense an opportunity.

Another way out of the cost-cutting dilemma would be to find new technologies that will allow the work to be done more cheaply. But once you’ve tried to address labour costs, the serious savings are not to be found in the chemistry labs. Our industry’s whole cost structure reflects the horrendous attrition rate of drug candidates in clinical trials. The big drug failures seem largely due to mistaken ideas about efficacy and surprises in toxicology - and these are very large biomedical problems that have no obvious solutions. If anyone makes a breakthrough in predictive toxicology, it’ll be very welcome indeed. But validating any such breakthrough to the point that entire drug programmes could be risked on it will take most of that 20 year time frame even if it’s announced next week. 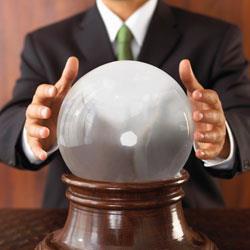 Our productivity problem might be addressed through a sudden surge of good new targets. That’s what fueled the genomics boom 10 years ago - the hope that there were lists of great new ideas written into our DNA. Since that hasn’t worked out quite the way the press releases outlined it, we may have to find ourselves redefining what we consider a good target. There are whole classes of potential targets out there that have so far proven too hard to drug - such as protein-protein interactions, transcription factors, epigenetic targets, and glycotechnology. I think that we’re going to be forced to come to grips with these areas and others like them.

So where does that leave the medicinal chemist of 2030? With a greater chance of working outside the regions of the world where most med-chem work is being done today and with a greater chance of working on targets outside the areas that we’ve been working in until now. But working, nonetheless. We’re not going away, not in 20 years, and hopefully not ever.