You have to make space for good sense when thinking about safety, argues Derek Lowe

You have to make space for good sense when thinking about safety, argues Derek Lowe

I fear that I’m about to say some things about laboratory safety that will be open to misinterpretation. It’s simultaneously a very easy and a very hard topic to address. The easy part is that everyone agrees that research chemistry has hazards, some of them potentially fatal, and that attention to safety is an essential part of working in the field. The hard part comes when you try to figure out what sort of ’attention to safety’ is most helpful.

I’ve worked under several different safety regimes, in both academia and industry, and I think that (as in so many other cases) it’s possible to be ineffective at both ends of the spectrum. Paying no attention to lab safety is clearly wrong. Research departments are staffed by a mixture of people with varying degrees of knowledge, skill and experience. If you never bring up the topic of safety, you’re in effect asking the least experienced and least able people to do their worst. With organic chemistry, that worst can mean taking out a wall, along with whatever (and whoever) might have been next to it. 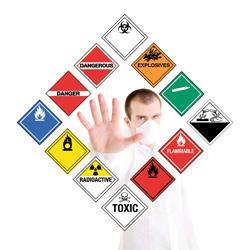 But every experienced chemist has a virtual compendium of stories titled Dangerous fools and their life-threatening ideas, some of which almost defy belief. A colleague swears that he once saw someone reach for a propane torch in order to free a stuck ground-glass joint - on a large-scale preparation of diazomethane in ether. One might imagine that a sufficiently comprehensive safety programme might deter people such as the diazomethane bomber, or the technician that I saw with my own eyes proposing to use the same technique on a metal joint in a hydrogenation room. But I honestly don’t think so. I’m not sure that anything can deter such people. Schiller had the right idea when he said that against stupidity, the gods themselves struggle in vain, and I believe I’ve seen safety programmes make the same effort - in vain.

I worked for some time in a facility that (after a serious accident) had established what is still the most extensive and complex safety environment I’ve ever experienced. There were multiple overlapping group meetings, each with a roll call, and departmental bonuses partly dependent on attendance. These meetings were supposed to go over accident reports in detail, and if there were none to be had, then examples from other departments (or even reports from universities or other companies) were studied. Every laboratory technique in the department was to be worked out into a detailed, step-by-step, written ’standard operating procedure’, and every experiment that might involve any hazard was to be reviewed, signed and countersigned before it could be run. There was a good-sized list of reagents that could not be used, or even ordered, and new candidates for this were always under review.

How did this work out? Well, as you might imagine, it added a substantial burden of time and effort. But surely no burden is too great when it means that everyone will work safely? About a year into the process, another serious accident occurred during the preparation of a hazardous reagent. This was being run on the wrong scale, using an outdated procedure, for a synthesis that arguably wasn’t needed in the first place. And there was already a large bottle of the reagent in the lab next door, as a check of the inventory system would have shown. So: the wrong chemistry, done the wrong way, for the wrong reason, when it didn’t have to be done at all. Where was the safety policy then?

The problem is that, as any study of human institutions shows, attempts to legislate or impose good sense must fail. I think that the too-comprehensive attempt at safety policy made people forget the need for such sense, though, and led to too much confidence (while also providing too many incentives to evade the numerous rules). There is no substitute for thinking about what you’re doing, but there’s no way to force people to do that. Is there?