Philip Ball considers the vegetative soul of an inorganic woodland

Philip Ball considers the vegetative soul of an inorganic woodland

Newton’s writings on alchemy often look strange to modern eyes - but not if you know what he is talking about. In an unfinished manuscript called Of Nature’s obvious laws and processes in vegetation  he writes of a ’metal tree’ that ’might be conserved and nourished in the glass’, and implies that metals and minerals show evidence of a ’vegetative soul’ akin to that which Aristotle attributed to plants. But these apparently fantastical notions had a sound basis, for Newton seems to have known how to make ’trees’ from metals.

William Newman of Indiana University, a specialist on Newton’s alchemy, has figured out the process. First, Newton dissolved iron in ’spirit of salt’ (hydrochloric acid, still sold under that archaic name in hardware stores) to make ferric chloride. Then he placed a piece of the reddish crystallised material into ’oil of sand’: potassium silicate, made by fusing sand with potassium tartrate. And the mineral ’tree’ begins to grow: branches sprout from the crystal and wind up through the clear viscous liquid, for all the world like creeping tendrils of plants. This is a chemical or silicate garden, which can be produced from a wide variety of salts. 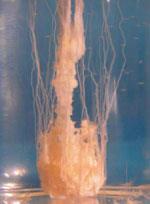 Underneath the spreading silicate tree

Despite its frequent use in chemical demonstrations, the silicate garden is still imperfectly understood. Hence two recent papers by Julyan Cartwright and colleagues at the University of Granada in Spain1,2 - one of the centres, appropriately, from which Arabic alchemy reached Europe. They have sought to understand what controls the morphologies of the crystal gardens for salts of calcium, manganese, cobalt and nickel growing in sodium silicate (’water glass’) .

The range of behaviours at different silicate concentrations is too wide to be easily summarised, but includes some peculiarly lifelike effects.1 For example, pressure oscillations in the membrane might cause pulses of tube growth, each surge inducing a change in growth direction. The tubes might initially be flexible and transparent, hardening with opaque precipitated salt over time. The seed crystal might sprout a thicket of small tubes at low silicate concentration, or just a few wide ones at higher concentration, each with typical wall thicknesses of a few microns. For manganese, the colour of the formations may vary over time from pink to brown; for cobalt the chromatic variations are even more spectacular, from purple to pink, green and blue, indicating changes in the metal-ion coordination. The tube walls have a complex and non-uniform composition due to co-precipitation of several salts.

Because the tube structures are produced by buoyancy-driven convection, Cartwright and colleagues wondered what morphologies would be produced if this convection were suppressed in microgravity. They managed to investigate that with an automated experiment performed on the International Space Station.2 This wasn’t the first example of chemical gardens grown in low gravity: David Jones and Ulrich Walter did so on a Space Shuttle flight in 1993.3 Without buoyancy, tubes still form, driven by osmotic pressure alone, but now in random directions from a central blob. The result looks deeply peculiar - dare one say alien. The researchers say that such complex and ’organic’ morphologies produced purely from inorganic chemistry offer a cautionary warning to astrobiologists.

Yet ironically, chemical-garden structures have themselves been implicated in the generation of life. Astrobiologist Michael Russell and colleagues suggest that colloidal, semi-permeable membranes of iron sulfide laced with nickel might grow in the mineral-rich outflows from hydrothermal vents, across which a redox potential could catalyse the formation of the organic anions that fed the origin of life.4 There is even a suggestion that inorganic membranes could have furnished the first life-like entities on Earth. Lee Cronin of the University of Glasgow, UK, has found that molybdenum oxides will form complex, dynamic mesoscale structures including hollow nanoscale compartments and semi-permeable membranes across which material can be osmotically pumped.5 Cronin hopes to see whether such structures can be developed into inorganic proto-cells with life-like characteristics - one might say, with a vegetative soul.