Scientific fraud highlights flaws in the way that scientists communicate with each other, suggests Philip Ball

Scientific fraud highlights flaws in the way that scientists communicate with each other, suggests Philip Ball 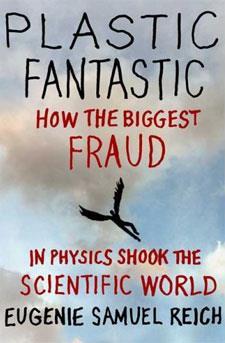 There is a passage in Eugenie Samuel Reich’s book Plastic fantastic  (Palgrave Macmillan, 2009) that, while apparently incidental to the main story, highlights a key element in what transpires. Reich has put under the journalistic spotlight the notorious fraud perpetrated by the young German physicist Jan Hendrik Sch?n, who between about 1997 and 2002 fabricated data of escalating boldness in a string of papers that reported remarkable findings in organic microelectronics.

Sch?n claimed to have made a series of devices from organic and polymer semiconductors that exhibited a range of interesting and possibly useful properties, from lasers to ’molecular-scale’ transistors to superconductivity that could be turned on and off with an electric field. He published paper after paper in Nature  and Science  to a mixture of admiration and envy. His managers at Bell Laboratories in Murray Hill, New Jersey, publicised the achievements enthusiastically, and there were even whispers of a future Nobel prize.

Admittedly, some physicists were puzzled and disturbed by the results. They looked almost too beautiful and clean to be true, and there were oddities about both the physics and the statistics. If Sch?n’s explanations didn’t seem awfully coherent, however, they at least succeeded in dispelling the darker suspicions.

Not until April 2002 did others notice that some of Sch?n’s plots of measurements from allegedly different devices were identical right down to the noise. At first Sch?n claimed to have simply got the data mixed up, but as the instances piled up, this explanation lost plausibility. When the Bell Labs managers finally launched an inquiry, the scale of the fraud they uncovered was breathtaking. Sch?n hadn’t just manipulated measured data to get the results he wanted. He had simply made up the data entirely, from devices that seemingly never existed at all. And he’d done it again and again.

Astonishingly, no one - not Sch?n’s collaborators nor his bosses - had ever demanded to see a working device. And Sch?n got away with it by claiming to be making them in the lab of his former PhD supervisor at the University of Konstanz in Germany, where he used a sputtering machine to apply aluminium oxide contacts. (As others tried and failed, Sch?n admitted that he wasn’t always successful himself.) When colleagues did occasionally ask to examine the devices under the microscope, he kept ’forgetting’ to bring them back until the requests disappeared.

Reich’s tale is gripping and depressing in equal measure, not least in showing scientists whom I respect made to look foolish or negligent. Her key claim is that the standard line - that the Sch?n affair vindicates the view that science is self-correcting because fraudulent research can’t be reproduced - is complacent, given how much Sch?n got away with and for how long. It’s rather touching, but also disturbing, that highly skilled researchers who failed to replicate the experiments assumed that they were just being incompetent. (Graduate students and postdocs tended to suffer more serious blows to their self-esteem and careers.) I think Reich has a fair point here.

But what especially rang true was her account of how Sch?n presented remarkable, and probably fabricated, results on the mobilities of charge carriers in the organic material pentacene at a conference in 1999. The measurements looked better than anything even the top experts in the field had achieved. Dan Frisbie, a young specialist in electronic materials at the University of Minnesota, was left speechless. ’But’, he says, ’nobody stood up and said "wow, this is truly amazing".’

Why not? Well, it happens all the time: claims that are bold, even ground-breaking, or just odd or incomprehensible elicit only passive stares from an audience. In 1858 a paper on the theory of evolution by natural selection, jointly prepared by Charles Darwin and Alfred Russel Wallace, was read out at the Linnaean Society and hardly an eyebrow was raised.

I suspect that at least part of the explanation is that people at talks and conferences switch off their brains after 10 minutes. And sometimes a speaker doesn’t convey a striking result clearly enough to be perceived as such. But I think there may be more general flaws in the way scientists communicate to one another: a failure to say what is meant, to listen to what is said, and to put it in context. This, indeed, seems also to be partly responsible for the publication of some of Sch?n’s papers despite serious questions about the data or interpretation: referees commented on such problems in a casual way after beginning with a glowing recommendation, so that editors never appreciated their importance.

Reich’s book implies that one of the lessons of this episode is that, while science needn’t necessarily be more sceptical and suspicious, it should be much more alert and explicit if such things aren’t to happen again.