Would element 137 really spell the end of the periodic table? Philip Ball examines the evidence

Would element 137 really spell the end of the periodic table? Philip Ball examines the evidence 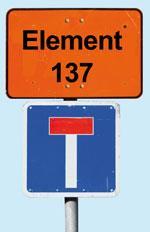 Does the periodic table run out? Folk legend asserts that Richard Feynman closed the curtains on the elements after the hypothetical element 137, inelegantly named untriseptium, or more appealingly dubbed feynmanium in his honour.

As physicists (and numerologists) will know, that is no arbitrary cutoff. 137 is an auspicious number – so much so that Feynman himself is said to have recommended that physicists display it prominently in their offices as a reminder of how much they don’t know. Wolfgang Pauli, whose exclusion principle explained the structure of the periodic table, was obsessed with the number 137, and discussed its significance over fine wine with his friend and former psychoanalyst Carl Jung - a remarkable relationship explored in Arthur I Miller’s recent book Deciphering the cosmic number  (W W Norton, 2009). When Pauli was taken ill in Zurich with pancreatic cancer in 1958 and was put in hospital room number 137, he was convinced his time had come - and he was right. For Carl Jung, 137 was significant as the number associated with the Jewish mystical tradition called the Cabbalah, as pointed out to physicist Victor Weisskopf by the eminent Jewish scholar Gershom Scholem.

Numerology was not confined to mystics, however, for the ’explanation’ of the cosmic significance of 137 offered by the astronomer Arthur Eddington was not much more than that. Yet Eddington, Pauli and Feynman were captivated by 137 for the same reason that prompted Feynman to suggest it was where the elements end. For the inverse, 1/137, is almost precisely the value of the so-called fine-structure constant (α), the dimensionless quantity that defines the strength of the electromagnetic interaction - it is in effect the ratio of the square of the electron’s charge to the product of the speed of light and the reduced Planck’s constant.

Why 137? ’Nobody knows’, Feynman admitted, adding that ’it’s one of the greatest damn mysteries of physics: a magic number that comes to us with no understanding by man. You might say the hand of God wrote that number, and we don’t know how He pushed his pencil.’ It’s one of the constants that must be added to fundamental physics by hand. Werner Heisenberg was convinced that the problems then plaguing quantum theory would not go away until 137 was ’explained’. But neither he nor Pauli nor anyone else has cracked the problem. The fact that the denominator of the fine structure constant is not exactly 137, but around 137.035, doesn’t diminish the puzzle, and now this constant is at the centre of arguments about the ’fine-tuning’ of the universe: if it was just 4 per cent different, atoms (and we) could not exist.

But was Feynman right about untriseptium? His argument hinged on the fact that α features in the solution of the Dirac equation for the ground-state energy of an atom’s 1s electrons. In effect, when the atomic number Z   is equal to or greater than 1/α , the energy becomes imaginary or, in other words, oscillatory – there is no longer a bound state. This doesn’t in itself actually mean that there can be no atoms with Z>137, but rather, there can be no neutral atoms.

However, Feynman’s argument was predicated on a Bohr-type atom in which the nucleus is a point charge. A more accurate prediction of the limiting Z  has to take the nucleus’s finite size into account, and the full calculation changes the picture. Now the energy of the 1s orbital doesn’t fall to zero until around Z=150; but actually that is in itself relatively trivial. Even though the bound-state energy becomes negative at larger Z, the 1s electrons remain localised around the nucleus.

But when Z reaches around 173, things get complicated.1 The bound-state energy then ’dives’ into what is called the negative continuum: a vacuum ’sea’ of negative-energy electrons predicted by the Dirac equation. Then the 1s states mix with those in the continuum to create a bound ’resonance’ state – but the atom remains stable. If the atom’s 1s shell is already ionised, however, containing a single hole, then the consequences are more bizarre: the intense electric field of the nucleus is predicted to pull an electron spontaneously out of the negative continuum to fill it.2 In other words, an electron-positron pair is created de novo, and the electron plugs the gap in the 1s shell while the positron is emitted.

This behaviour was predicted in the 1970s by Burkhard Fricke of the University of Kassel, working with nuclear physicist Walter Greiner and others.1 Experiments were conducted during that and the following decade using ’pseudo-atoms’ – diatomic molecules of two heavy nuclei created in ion collisions – to see if analogous positron emission could be observed from the innermost molecular rather than atomic orbitals. It never was, however, and exactly what would happen for Z>173 remains unresolved.

All the same, it seems that Feynman’s argument does not after all prohibit elements above 137, or even above 173. ’The periodic system will not end at 137; in fact it will never end!’, says Greiner triumphantly. Whatever mysteries are posed by the spooky 137, this is apparently not one of them.