A year spent in a chemistry department led poet Diana Hendry to hunt out links between science and poetry. Are poets more open to science than scientists to poetry, she asks

A year spent in a chemistry department led poet Diana Hendry to hunt out links between science and poetry. Are poets more open to science than scientists to poetry, she asks 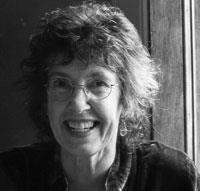 A year as a Royal Literary Fund fellow based in the chemistry department of Edinburgh University, UK, has made me ponder the connections between science and poetry and wish to juggle with the common perception of the two being somehow in opposition. It’s now 50 years since C P Snow, in his famous Rede lecture, The Two Cultures  (1959), outlined what he saw as the breakdown in communication between science and the humanities. I’d like to suggest that what does exist, and indeed has grown, is a language barrier that is intellectually limiting.

Within the craft of poetry - in its metrics and forms and figures of speech - there is much that belongs to both mathematics and music and can perhaps be allied to the scientist’s algebra and equations.

Edwin Morgan, Scotland’s poet laureate and a poet who has tackled all manner of scientific topics from particle physics to the computer’s first Christmas card, records links between poets and science from Lucretius, Virgil, Dante, Milton, Goethe and Shelley to Leopardi.1

But there is a difference in the use of tradition by poets and scientists. It’s a difference of perception. Scientists think science progresses; poets think poetry changes. So science works by rejecting, or at least qualifying, the laws and discoveries of the past, improving on what’s already known, working towards an ever-closer understanding of reality. The Truth. Poets, on the other hand, are merely offering another version of the truth, one that doesn’t deny the truths of the past.

Science gives to poetry new worlds to explore and, in the main, poets seem pleased to take up that challenge. I’m less certain that scientists see the value of poetry, are willing to absorb the poet’s leaps of imagination, the metaphorical ability (surely chemical at root) to combine unlikely elements and come up with fusion, not to mention the sharpening of the senses, the training of the eye. 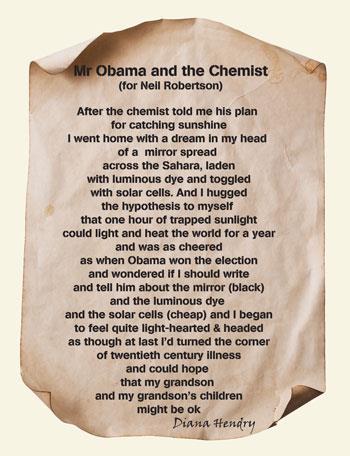 Simon Armitage is a British poet whose range of subject matter includes global warming and astronomy. Armitage has suggested that ’poetry and science, for all their perceived differences, might well be attempting to accomplish the same thing through remarkably similar means,’ though he points out that science is ’besotted with prediction’ while the concern of poets is with possibility.1

Sitting in on a couple of seminars given by postgraduates, I found I hardly understood a word. But there were words which for me were pulled out of their more familiar use and given, in a chemistry context, a new meaning. Two such words were promiscuous (applied, I think, to certain cells) and chaperone (I’m not sure what was chaperoning what). It made me think that if words like this could be used as part of a scientific language, why couldn’t I borrow words from the scientists’ language? Because scientists have a language. And one of the things about learning a new language is that you also learn new ways of thinking. Which is why, to me, an exchange between scientists and poets seems important.

John Herschel, son of William Herschel, who apart from being an eminent scientist also composed light verse, wrote this about the word iron. ’[Some] regard this metal as incombustible, the chemist, who sees it burn with the utmost fury ... the poet, who uses it as an emblem of rigidity... the smith and the engineer in whose hands it is plastic... the jailer who prizes it as an obstruction, and the electrician who sees in it only an open channel of communication ...’2 One word that carries a different meaning for different people. For me, if I’m able to allow that word to carry so many of those meanings, somehow my perception of it is enlarged. And in a small way, so is my perception of - and indeed pleasure in - life.

Diana Hendry is a poet based in Edinburgh, UK