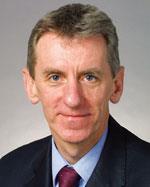 The UK coalition government has recently announced that it plans to reform NICE. Do you have an idea of what this may involve?

Not yet. They have talked about re-establishing NICE under primary legislation as a non-departmental public body. In practice that means we would be set up under an act of parliament and therefore you would also need one to disestablish the organisation. At the moment NICE is set up under regulation, so the secretary of state has that power.

By re-establishing the institute as a non-departmental public body the government wants to underline the independence of NICE and feels that it would send an important signal out to the NHS and the broader health community.

In 2008 the government’s Health Select Committee reported that it ’welcomed moves by NICE and the pharmaceutical industry to collaborate more closely’. What are these moves?

When we have completed a review of an existing drug we indicate where we see the opportunities for further research on that drug or the particular indication for which we have appraised the drug. Consequently, every time we publish an appraisal we indicate what other studies would be useful.

We also provide a scientific advice service for the pharmaceutical industry and are interested in extending it to the medical device and diagnostics industries as well. These companies can talk to us in confidence about a new treatment, a new drug they are developing or an indication for an existing drug and they can tell us about the clinical trial strategy that they are putting in place. The benefit for the company is that they can take our advice on endpoints from those clinical studies which are needed by our advisory committees if that drug or indication for that drug was ever to come to NICE for an appraisal. From our point of view, our advisory committee gets the best possible evidence and are not confronted with substantial holes in that evidence that may constrain them from producing a guidance. It’s a win-win situation for NICE and the companies involved.

In the future we are likely to see a shift in treatment towards personalised medicine. Will this make NICE’s work more difficult?

If the evidence is clear and comprehensive then our advisory committees can do the job they currently do pretty much with the methods they apply. The question is how much will those new treatments cost and, given that they are likely to be recovered over a smaller patient population (because they are very targeted), that may prove challenging for the NHS and also for the companies, who have got to be confident about the value of their proposition. I’m sure companies will look at this in terms of the benefits to patients, but they also need to see it from the perspective of health systems around the world.

NICE has recently come under fire because of its ’risk sharing schemes’ to cover the costs of drugs. Can you explain what their objective is?

There are a number of different types of patient access schemes, but their objective is to reduce the effective price that the NHS is paying for the treatment. It is entirely up to companies to decide whether they want to put a scheme forward. We cannot advise them to do so or help them design the scheme.

We need to be aware that these schemes individually, but more importantly cumulatively, place a considerable burden on the NHS, particularly where these schemes require an understanding of the impact of the treatment on individual patients - as opposed to, for example, a straight discount arrangement on the price. Data needs to be collected on individual patients and this requires a lot of work for the NHS and, to be fair, for the companes too in order for the scheme to operate and have its effect.

How did NICE International start?

People around the world are interested in NICE and are keen to use evidence to inform policy and practice in their own health system. We have recently tried to convert that interest into paid activity, not to make a profit, simply to be able to fund some capacity inside NICE to enable us to work outside the UK with countries that are interested in what we do.

NICE International is working in countries as far apart as Chile, China, Turkey and parts of Central America. They are all countries with developing healthcare systems and different challenges but in all cases they are keen to make sure that the way they develop their health systems, particularly the way they use the money they have to invest, is calculated to bring the maximum benefit to patients.

What will be the greatest health-related challenges of the next 10 years?

They are all about lifestyle, about exercise, nutrition and the diseases of an ageing population in the developed healthcare systems. In developing countries these challenges exist too to a lesser extent but their challenges are more basic around securing a clean water supply and the challenges of urbanisation. These are the sort of things that will generate the principal problems of the future.